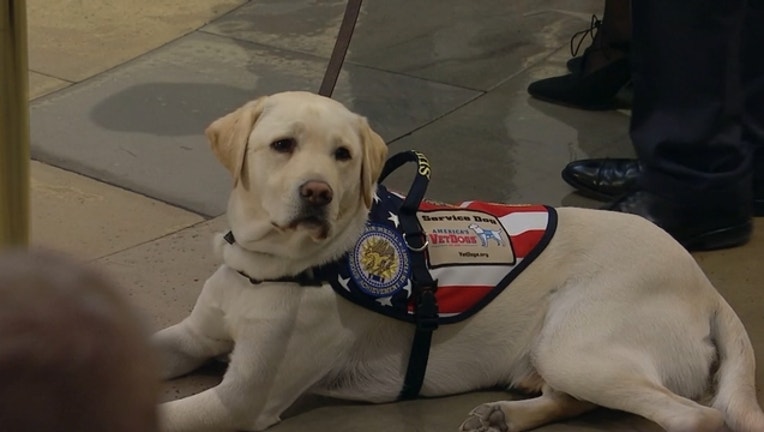 Sully, Bush's faithful service dog, will be given the 2019 ASPCA Humane Award. The yellow Labrador is being recognized with the Public Service Award, "which is given to an outstanding animal or a public service officer who has made a heroic effort to save an animal’s life in the past year or has demonstrated a commitment to his or her career,” according to the ASPCA.

"Trained and placed by service dog provider America's VetDogs, Sully was immortalized in iconic images during President Bush's funeral last December – at one point laying down in front of the President's casket."

The canine served as Bush's service dog from June 2018 until the former president's death in Nov. 2018. Sully began his time with Bush after he had been hospitalized several times last year.

According to the ASPCA, Sully was given the honor for “bringing not just assistance but love and joy to the former president in the last months of his life.” Sully now works at the Walter Reed National Medical Center in Maryland, comforting injured veterans and their families.

“For demonstrating outstanding dedication to President Bush and veterans at the Walter Reed National Military Medical Center, Sully is the recipient of the 2019 ASPCA Public Service Award,” the ASPCA said.

Sully will take home the award on Nov. 14 at the ASPCA Humane Awards Luncheon in New York City.

Other animals being awarded this year include Sweet Pea, a former dogfighting victim rescued in 2015, who is now the face of dogfighting awareness in New Jersey and Hannah "Kitty Lady" Shaw, who provides rescue and adoption services to orphaned kittens.