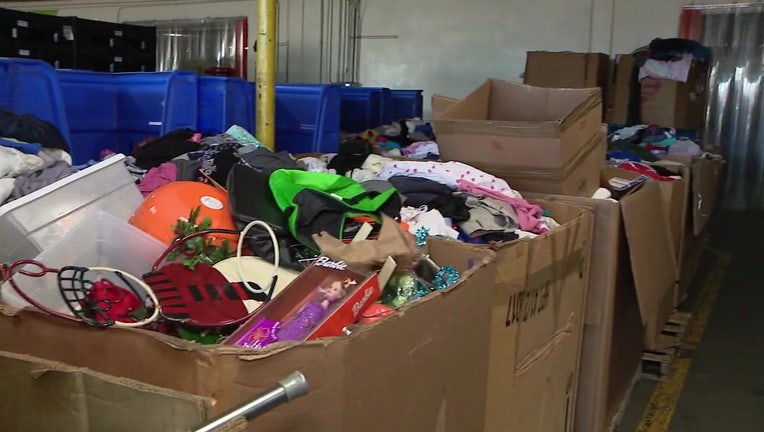 Across the country, thrift stores have been flooded by household items, the offerings of people who have been homebound for months and are eager to clear out some of their possessions.

Problem is, too many such items could most accurately be described as trash. Many of the donations are defective or worn-out items — gifts from well-intentioned people who want to reduce waste but who donate items that simply shouldn’t be donated.

The thrift stores, wary of discouraging donations, say that, as always, they welcome most contributions, especially after a recession that inflicted harm most heavily on the lowest-income Americans, many of whom now depend on them. And they note that most of the items that arrive at their stores remain perfectly acceptable.

But in the midst of spring cleaning season, the stores want to slow a barrage of unwanted contributions that increased during the COVID-19 pandemic.

"I’m careful not to shake my finger at donors because without them, we wouldn’t have a business model," said Megan Fink, a marketing executive at Palmetto Goodwill, which operates 31 stores in South Carolina. "But we are trying to educate."

For the thrift stores, such donations aren't just a hassle to dispose of. They also magnify their garbage-disposal costs. The stores need time and staffing hours to process them.

"It actually ends up costing Goodwill rather than helping them," said David Courard-Hauri, a professor of environmental science and sustainability at Drake University.

The spikes in trash expenses can divert money away from other services the agencies could spend in their communities, like workforce development programs.

In Wisconsin and Illinois, stores have reported an influx of flammable and hazardous donations, including lead-acid batteries. Those items increase the stores' costs because they must be disposed of by a waste removal company in an environmentally friendly way, said Julie Deming, a merchandising director at Goodwill Industries of Southeastern Wisconsin, which operates 100 Goodwill stores in southeastern Wisconsin and the Chicago metro area.

"We’ve had all sorts of donations with people cleaning out their house," Deming said. "I think it’s important to educate donors that we can’t repair items."

Informing donors of this fact won't necessarily solve the problem. Thrift workers note that many donors already know what sorts of items they should avoid contributing yet dump their trash at the stores anyway just to get rid of it.

"If we don’t take something and they know we don’t take something, they don’t come when we’re open," said Rolf Halverson, director of operations at Goodwill Industries of Houston, which has 61 retail stores in Texas. "They come in at 10:00 p.m. or in the middle of the night or run behind the store and drop off a ripped-up sofa. And that adds weight to our trash. So they put the bill on us instead of them."

The increase, workers say, was driven in part by temporary store closures during the pandemic. Donors were still dropping items off while stores were closed, which resulted in some donations, like couches, becoming moldy after being caught in the rain, said Barbie Parker, Goodwill Houston’s vice president of fund development and community relations. Other agencies, like Fink’s in Charleston, also received such donations when they were closed.

Some cities and municipalities were upset when donated items were left outside the stores, so Goodwill had to assign truck drivers to haul them away, said Brian Itzkowitz, an official at Goodwill Industries International.

It’s unclear whether or how much rising trash costs affected all 156 independent Goodwill agencies in the United States and Canada and 12 affiliates in other countries. Goodwill Industries International, of which the local independent agencies are members, doesn't collect data on trash expenses, Itzkowitz said.

But last year, such costs totaled $1.2 million for Goodwill Northern New England, which operates 30 stores in Maine, New Hampshire and Vermont. Unusable donations became a problem for the agency even before COVID-19 struck; its trash expenses have spiked 155% in the past five years, it estimates.

"What we’re anecdotally seeing is that it’s a younger generation of donors," said Heather Steeves, the agency’s communication manager. "Our grandmothers knew what to donate to Goodwill. And the stuff that our grandmothers bought lasted a heck of a lot longer. It was built better; it was built with a second life designed into it."

"Now in the world, we’re seeing a lot more one-use items," she said. "At the same time, we have millennials, like me, who don’t want to throw stuff out. We want to act as sustainably as possible. So there’s this optimism of, ‘I’m sure someone wants this old spaghetti jar to turn into a flower vase.’ But the truth is, they don’t. Some things are recyclables or trash and should not be brought to Goodwill."

Indeed, experts say the recent increase in trash costs for these stores is part of a larger trend that resellers, including mom-and-pop thrift stores, have been seeing for perhaps 15 years.

"We just have a lot of things in our homes and our storage units that are filled with stuff that just doesn’t last long," said Cynthia Isenhour, a professor of anthropology and climate change who has been researching Maine’s reuse economy for years. "So it breaks, and people don’t know what to do with it. A lot of it is not repairable because of the low quality of the materials."

The spike in pandemic-induced trash goes beyond Goodwill. Other stores, like the Farmington Thrift Shop in Farmington, Maine, say they, too, have experienced an increase in trash donations during the pandemic.

Dale Bannon, the national community relations & development secretary for the Salvation Army, declined to say whether its stores have faced a spike in trash costs. But he said in a statement that it was "important for people to check with the individual needs of their local thrift store."

Most Salvation Army locations, Bannon said, are "in need of high-quality, new and gently used items."

As for Goodwill, workers say donors should check their local agency's website to make sure a particular item would be an acceptable donation.

Steeves, of Goodwill Northern New England, has a simple tip for anyone interested in donating items to a thrift store:

"If you wouldn’t give it to your judgy mother-in-law," she said, "then don’t donate it."