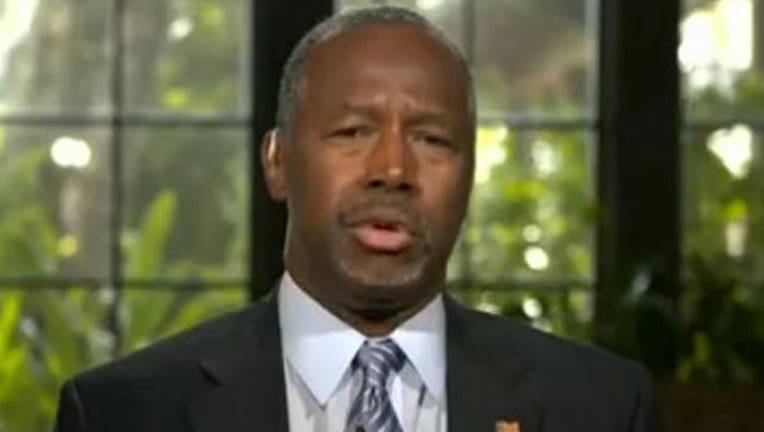 WASHINGTON (AP) — Republican presidential candidate Ben Carson says Islam is antithetical to the Constitution, and he doesn't believe that a Muslim should be elected president.

Carson, a devout Christian, says a president's faith should matter to voters if it runs counter to the values and principles of America.

Responding to a question during an interview broadcast Sunday on NBC's "Meet the Press," he described the Islamic faith as inconsistent with the Constitution.

"I would not advocate that we put a Muslim in charge of this nation," Carson said. "I absolutely would not agree with that."

He did not specify in what way Islam ran counter to constitutional principles.

"To me this really means he is not qualified to be president of the United States," said the group's spokesman, Ibrahim Hooper. "You cannot hold these kinds of views and at the same time say you will represent all Americans, of all faiths and backgrounds."

Hooper said the Constitution expressly forbids religious tests for those seeking public office and called for the repudiation of "these un-American comments."

In a separate appearance on NBC, one of Carson's rivals for the GOP nomination, Ohio Gov. John Kasich, was asked whether he would have a problem with a Muslim in the White House. "The answer is, at the end of the day, you've got to go through the rigors, and people will look at everything. But, for me, the most important thing about being president is you have leadership skills, you know what you're doing and you can help fix this country and raise this country. Those are the qualifications that matter to me."

Texas Sen. Ted Cruz, who taped Sunday an episode of Iowa Press, an Iowa Public Television program, was asked if he agreed with Carson's statements on Muslims being president. "The Constitution specifies that there shall be no religious test for public office, and I am a constitutionalist," Cruz said.

Carson's comments came amid lingering fallout over Republican Donald Trump's refusal last week to take issue with a man during a campaign event who wrongly called President Barack Obama a Muslim and said Muslims are "a problem in this country."

Also speaking on NBC on Sunday, Trump said that a Muslim in the White House is "something that could happen... Some people have said it already happened, frankly."

In multiple interviews Sunday, Trump tried to draw a distinction between all American Muslims and extremist Muslims in the U.S. and elsewhere.

"I have friends that are Muslims they're great people, amazing people," Trump said on CNN's "State of the Union."

"You have extremists Muslims that are in a class by themselves," Trump added. "It's a problem in this country, it's a problem throughout this world.... You do have a problem with radical Muslims."

GOP candidates have been split over whether to criticize Trump, who has been a vocal skeptic of Obama's birthplace and faith. Obama is Christian.

In the NBC interview, Carson said he believes that Obama was born in the U.S. and is Christian, saying he has "no reason to doubt" what the president says.

Carson also made a distinction when it came to electing Muslims to Congress, calling it a "different story" from the presidency that "depends on who that Muslim is and what their policies are, just as it depends on what anybody else says."

"If there's somebody who's of any faith, but they say things, and their life has been consistent with things that will elevate this nation and make it possible for everybody to succeed, and bring peace and harmony, then I'm with them," Carson said.

This story has been corrected to show that two Muslims serve in Congress, not one.