Gov. Abbott will issue executive order next week to re-open some Texas businesses

While it gives folks something to be optimistic about, officials are urging people not to ease up with following restrictions.

Texas Governor Greg Abbott announced Friday that he will issue an executive order next week outlining steps to begin re-opening some businesses in the state.

He stopped short of going into full detail about what that may mean and how long it would take.

While it gives folks something to be optimistic about, officials are urging people not to ease up with following restrictions.

“We will focus on protecting lives, while re-storing livelihoods. We can and must do this. We can do both,” Abbott said.

Gov. Abbott will issue executive order next week to re-open some Texas businesses

Texas Governor Greg Abbott announced Friday that he will issue an executive order next week outlining steps to begin re-opening some businesses in the state.

He was reluctant to share details early, but did say testing will play a part..

“Testing will be a component of it and we will operate very strategically. We want to open up but we want to open up safely, knowing if we do it without the proper strategies, it will just lead to a potential closure because of another outbreak of COVID-19,” he explained.

Fewer than 10 percent of those have tested positive.

And many others, who carry the virus and can spread it, but don’t have symptoms, don’t factor into those numbers.

“We’re still seeing quite a few cases that are being reported everyday,” Dr. Diana Cervantes.

She said the number of new cases are still high, but hopes officials could begin to gradually ease restrictions in three or four weeks.

“We can definitely slowly begin to release some of those restrictions, so long as we’re keeping tab of any new cases. And they’re going to happen, it’s going to happen because it’s highly unlikely we’re seeing a decrease in cases because the people are, the population is becoming immune,” Dr. Cervantes said. “That’s not likely. It’s because we’re taking all these measures to keep from exposing each other

So while state officials work to hash out a plan for reopening businesses, they are urging people any positive news has come because restrictions are working.

And for now, it stays that way.

“This fight against COVID-19 has been compared to a war, and just like a war, we don't stop fighting until you know peace is at hand,” DSHS Commissioner Dr. John Hellerstedt said. 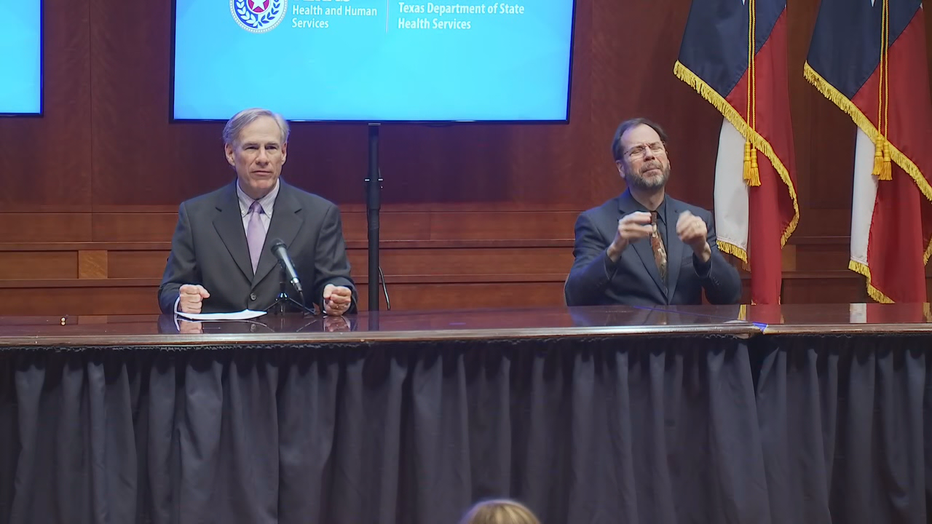 Gov. Abbott also said Texas ranks 2nd in the nation of most people recovered from COVID-19, with more than 1,300 so far.

Still, he cautioned against folks letting their guard down.

The governor held press conference Friday, and used graphs to show the rate of infection and death in the hardest hit counties. Dallas County is one of them.

Denton County does appear to be leveling off, as the number of new cases of infection at the Denton State Supported Living Center -- which was hit hard -- has tapered off.

Gov. Abbott said Collin County’s growth of cases has not slowed as much as it has in other counties, and Tarrant County's curve is not bending quite yet.

The governor said he knows Texans are eager to get back to work.

Details will be part of that new executive order being issued sometime next week on reopening some businesses.

Abbott also said that a record number of Texans have filed for unemployment benefits in recent weeks. He said his office is aware that many people are not able to access the system to apply for benefits but said additional help is now in place.

Hundreds of employees who work for the state legislature are ready with to assist the Texas Workforce Commission with filing claims seven days a week.

Gov. Abbott said the state is also assisting frontline workers with childcare with use of an online portal unveiled on Friday.

Click here for more information on childcare for frontline workers.

He added that he'll discuss additional testing capabilities next week when he reveals details of his new executive order.

His message going into Easter weekend is stay home and healthy.