INDIANAPOLIS - An Indiana man charged in his young granddaughter’s fatal fall from a cruise ship’s open window in Puerto Rico agreed to plead guilty in her July 2019 death, explaining that he was doing so “to try to help end part of this nightmare for my family.”

Salvatore “Sam" Anello, who was holding Chloe Wiegand when she slipped from his grasp and fell about 150 feet to her death from an open 11th-floor window on Royal Caribbean Cruises ship, filed change of plea documents Monday in a Puerto Rico court in which he agreed to plead guilty to a negligent homicide charge in the 18-month-old's death, said the family's attorney, Michael Winkleman.

Under the plea agreement, Anello wouldn't serve time behind bars and would serve his probation in Indiana, Winkleman said Wednesday, adding that a hearing in which a judge would consider the plea hadn't been scheduled.

“I took a plea deal today to try to help end part of this nightmare for my family, if possible,” Anello, of Valparaiso, said in his statement. “The support they continue to give me has been beyond overwhelming and I can’t tell you how grateful I am for them.”

Chloe Wiegand fell to her July 8 death from Royal Caribbean Cruises' Freedom of the Seas ship, which was docked in Puerto Rico. Anello was charged last year in Puerto Rico with negligent homicide in her death and initially pleaded not guilty. 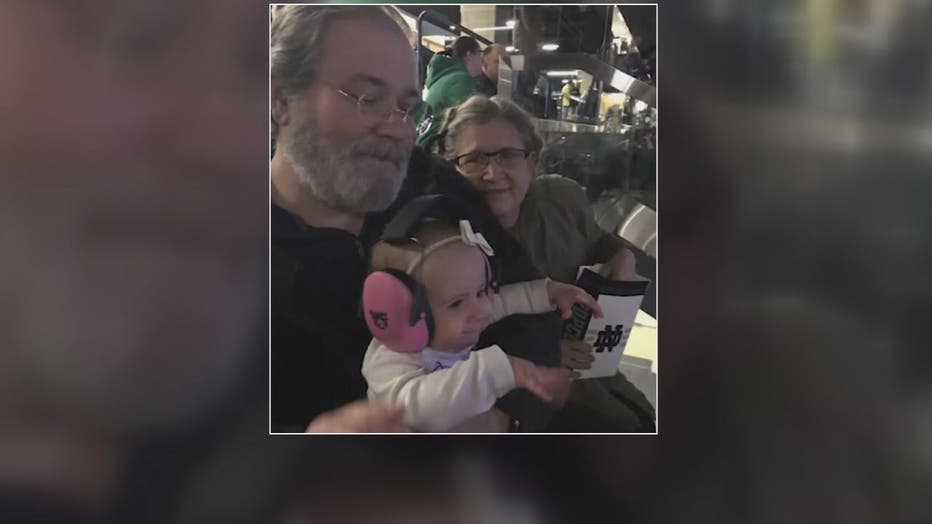 Anello, 51, has insisted that he did not know the window was open when he lifted Chloe up to it, saying he did so to allow her to bang on the glass like she did at her brother's hockey games. He told “CBS This Morning” in November that he was trying to stand Chloe on the window’s railing when she fell out of the window. He also said he is colorblind and that may be why he didn’t realize the tinted window was open.

“From my point of view, at the moment the accident happened, it was as if this wall of protective glass disappeared. I was in complete disbelief,” Anello said in Wednesday's statement. “It was a nightmare of the likes I could never have imagined before. I wasn’t drinking and I wasn’t dangling her out of a window. I just wanted to knock on the glass with her as we did together so many times before.”

Chloe Wiegand’s parents sued Royal Caribbean in December, accusing the operator of negligence in her death by allowing the 11th-floor window in the ship’s children's play area to be open.

Winkleman said Anello’s proposed guilty plea in Chloe’s death would have “little or no effect at all on the civil lawsuit,” noting that Anello is not a party to that case

“He’s not a party to that case and therefore it is not relevant,” Winkleman said.

Royal Caribbean Cruises has said in court filings that surveillance video shows that Anello leaned out an 11th-floor window in a children's play area on the ship for about eight seconds before he lifted his granddaughter to the window. Investigators say the girl slipped from Anello's hands and plummeted to her death.

The Granger girl's family, though, claimed in a January court filing responding to the cruise line's allegations that it would have been “physically impossible” for Anello to lean out of that window.

Winkleman said Anello's decision to agree to plea guilty “is in the best interests of the family so that they can close this horrible chapter and turn their focus to mourning Chloe.”

Winkleman said the family would also be focusing on “fighting for cruise passenger safety by raising awareness about the need for all common carriers to adhere to window fall prevention laws designed to protect children from falling from windows."

A message seeking comment on Anello's plea agreement was left Wednesday with a spokeswoman for Royal Caribbean Cruises.