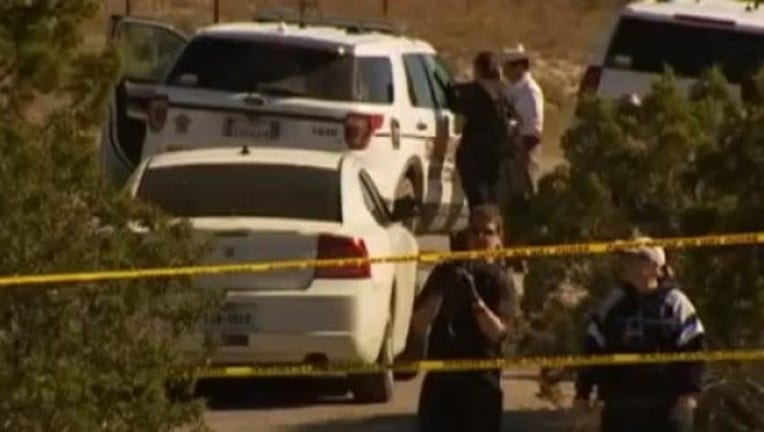 HAYS COUNTY, Texas - A Hays County deputy is recovering after being shot in an ambush attack.

The sheriff believes the suspect, who is now dead, lured deputies with a false burglary report.

"Just trying to get back into regular lifestyle," said Wimberley resident Micheal Gilbreath.

Gilbreath is happy to have peace and quiet in his Wimberley neighborhood again after being jolted out of bed Friday morning by the sound of gunfire.

"We were scared. My wife is shaking like a leaf. Needless to say she didn't go back to sleep," he said.

Shortly before the shots rang out, Hays County sheriff Gary Cutler said someone placed a call to 911 to report a man with a gun possibly breaking into Jean's Antiques.

When deputies arrived to investigate, cutler said 26-year-old Rocky Miles West was waiting for them behind a rock wall. Cutler said he fired nine rounds from a shotgun in their direction.

Three patrol cars were struck and deputy Benjamin Gieselman was hit causing multiple injuries from his neck down.

Gieselman has since been released from the hospital.

"Very lucky. I mean the shooter was such a close distance to these cars with a shotgun. It's pitch dark, there's not a lot of area. There's no streetlights," said sheriff Cutler.

It's the kind of situation the deputies trained for at the Alerrt Center in San Marcos.

"It's practiced and rehearsed so many times that it becomes instinctive," said John Curnutt of Alerrt.

"When there's a shot, the natural instinct is to try to get small or get away, but when you're that close to it what we may have to do it turn towards it, get our body armor protecting our vital organs and we may have to put rounds on the person putting rounds on us," said Curnutt.

Those drills are done just as how the majority of situations unfold for police-- in darkness.

"We try to stress the officers out as much as possible and help them work through that stress," said Curnutt.

Sheriff Cutler said his office has been dealing with West on and off for 14 years.

He believes West staged the entire event luring them with the burglary call which proved false.

Even though the threat is gone, Gilbreath said he his neighbors are forever changed.

"Everybody used to sleep with their doors unlocked, but now the doors are being locked," said Gilbreath.

The 100 club is providing financial assistance to the wounded deputy's family. If you would like to contribute click here:  https://100clubcentex.com/.