The heroic actions of an Alabama news photojournalist are bringing some to tears after raging floodwaters swept across parts of the state on Wednesday.

Since then, the water has receded in Birmingham, but the scenes captured by FOX 6 photojournalist Vincent Parker and others in the area less than 24 hours ago paint a different picture.

"It was flooding everywhere," Parker told FOX Weather as rescue crews were called to several locations to help drivers stuck in high water. The flooding was caused by slow-moving storms that continued to move over the same areas – a process known as training.

Parker was headed to another water rescue scene initially, but he could not get there because floodwaters greeted him in every direction he turned.

He then came upon a scene on University Boulevard near St. Vincent’s Hospital, where he noticed four cars underwater.

"As I was shooting video, I saw a lady still in one of the vehicles," Parker said.

Parker said he saw her trying to get out but too terrified to attempt to flee.

"So I just put my rain boots on and got to trudging through the water and went to get her out of the vehicle," Parker said.

With adrenaline racing, he was still cautious slogging through the water because her car was next to a light pole.

"I didn’t know if her car hit the light pole. I didn’t know if it was maybe some electricity going on under there. So I gingerly walked to her vehicle and got her attention and let her know that I was coming to help her get out," Parker said.

Both Parker and the woman he rescued are doing OK.

Sarah Phillips, who works at St. Vincent’s Hospital, witnessed the water rescue from outside her patient’s room.

"How precious of him to do that! Had me in tears," Phillips told FOX 6. "How cool his name is Vincent! And this is outside St Vincent’s! He is an angel!"

More than 2 inches of rain fell Wednesday in Birmingham. It was less than a half-inch shy of a 1925 record. The National Weather Service also issued a Flash Flood Warning for much of the southern area. In some parts of the city, just a half-inch of rain in an hour can cause issues. 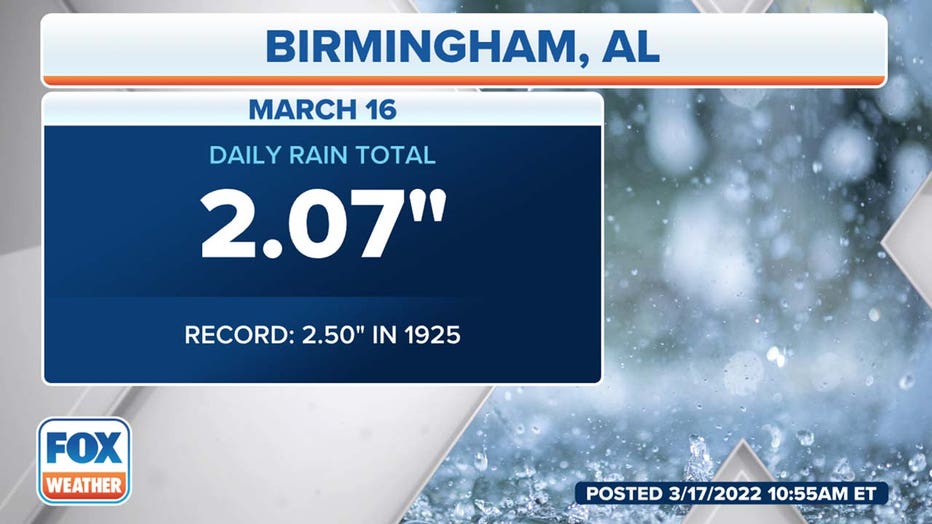 "I’ve never seen this much water on the south side flowing as fast as it was," Parker said.

Flowing floodwaters can do a number on cars and almost render the weight of a vehicle powerless. It only takes inches of rushing water to sweep a car off the road.