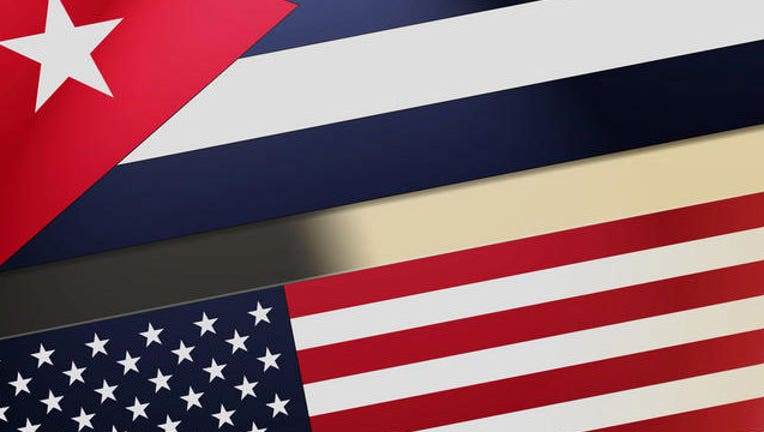 SANTA CLARA, Cuba (AP) — The first commercial flight between the United States and Cuba in more than a half century landed in the central city of Santa Clara on Wednesday morning, re-establishing regular air service severed at the height of the Cold War.

Cheers broke out in the cabin of JetBlue flight 387 as the plane touched down. Passengers — mostly airline executives, U.S. government officials and journalists, with a sprinkling of Cuban-American families and U.S. travelers — were given gift bags with Cuban cookbooks, commemorative luggage tags and Cuban flags, which they were encouraged to wave for the TV cameras at the tarmac.

The arrival opens a new era of U.S.-Cuba travel with about 300 flights a week connecting the U.S. with an island cut off from most Americans by the 55-year-old trade embargo on Cuba and formal ban on U.S. citizens engaging in tourism on the island.

"Seeing the American airlines landing routinely around the island will drive a sense of openness, integration and normality. That has a huge psychological impact," said Richard Feinberg, author of the new book "Open for Business: Building the New Cuban Economy."

The restart of commercial travel between the two countries is one of the most important steps in President Barack Obama's two-year-old policy of normalizing relations with the island. Historians disagree on the exact date of the last commercial flight but it appears to have been after Cuba banned incoming flights during the October 1962 Cuban Missile Crisis.

Secretary of State John Kerry said on Twitter that the last commercial flight was in 1961.

U.S. Transportation Secretary Anthony Foxx and JetBlue CEO Robin Hayes both addressed passengers on board the 150-seat Airbus A320, which was staffed by a specially selected five-member crew of Cuban-Americans. Airline executives changed from American business attire into loose-fitting Cuban-style guayabera shirts before landing.

"This is one of the most visible examples of the president's activities to restore diplomatic relations with Cuba," Foxx said.

"It's a positive step and a concrete contribution to the process of improving relations between the two countries," Cuba's vice minister of transportation Eduardo Rodriguez told journalists Monday.

Neta Rodriguez, a 62-year-old Havana-born South Florida homemaker, checked in Wednesday morning with her daughter, son-in-law and three grandsons for a visit to family in Santa Clara and Havana.

More than the historic nature of the flight, she said she appreciated the $200 price and the ability to book online instead of visiting a charter office

U.S. travel to Cuba is on track to triple this year to more than 300,000 visitors in the wake of the 2014 declaration of detente. Cuba's cash-starved centrally planned economy has been bolstered by the boom in U.S. visitors, along with hundreds of thousands of travelers from other nations hoping to see Cuba before more Americans arrive.

Commercial flights are expected to significantly increase the number of American visitors, although it's not clear by how much. Many of the air routes are currently used by expensive charter flights that are largely expected to go out of business with the advent of regularly scheduled service from the U.S.

Hundreds of thousands of Cuban-born Americans fly to the island each year with the chaotic, understaffed charter companies, which require four-hour check-in waits and charge high rates for any luggage in excess of restrictive baggage allowances. Americans without ties to Cuba have found it hard to negotiate the charters, most of which don't accept online bookings or help travelers navigate the federal affidavit still required for U.S. travelers to Cuba.

Cuban officials insist the continuing U.S. ban on tourism will limit the impact of commercial flights to Cuba, but some experts believe the drastic reduction in the difficulty of flying to Cuba could turn the surge in U.S. visitors into a tidal wave. Americans are allowed to visit the island on "people-to-people" cultural and educational visits, among other reasons.

Americans who fit one of 12 categories will now be able to fill out a federal affidavit by clicking a box on an online form and, in many cases, buy their Cuban tourist visa near the check-in counters of U.S. airports. Within weeks, Americans will be able to fly direct from cities including Chicago, Philadelphia and Minneapolis, Miami and Fort Lauderdale to eight Cuban cities and two beach resorts.

The final announcement of routes to Havana, which could be announced Wednesday and start before December, is slated to include flights from Atlanta, New York, Los Angeles and Houston, among others.