Amy Coney Barrett gave an opening statement Oct. 12, 2020 at the confirmation hearings for the Supreme Court.

LOS ANGELES - The Supreme Court is the highest federal court in the United States and is charged with ensuring equal justice under law for the American people.

But why are there are nine Supreme Court justices in the first place? Has there ever been a different number? Could it ever change?

Let’s break it down.

The history of the Supreme Court

The first Supreme Court session was on Feb. 1, 1790, and George Washington, the first president of the United States, appointed six justices to the court.

According to Dave Roos with History.com, the Judiciary Act of 1789 divided the circuit courts into three regions: Eastern, Middle and Southern. That way, it would limit the geographical area traveled by justices, and two justices could reside in each area.

But over the next 200 years, the number of justices varied.

In 1866, Congress passed the Judicial Circuits Act of 1866, stating that the next three justices to retire would not be replaced. The legislation removed one seat in 1866 and a second seat in 1867, reducing the number of seats on the court from 10 to eight justices.

The Judiciary Act of 1869 set the number of Supreme Court justices back to nine, the number that sits on the court today.

So, why nine judges?

While it is beneficial to have an odd number of justices, in the case of a tie in a debate, it is a law that could still be changed.

In fact, the Constitution does not specify the number of Supreme Court justices that must serve on the court — this number is solely set by Congress, and therefore could be overturned.

It’s the president’s job to nominate a replacement for a vacancy on the court, and the final vote on a justice requires only a majority of senators present to pass it.

In the history of the court, five nominees have received no vote at all. The most recent was Merrick Garland in 2016, President Barack Obama’s nominee. Congressional Republicans refused to vote on the nomination on the grounds that it was a presidential election year. Thus, late Justice Antonin Scalia’s seat remained vacant until Donald Trump won the election and nominated Neil Gorsuch. 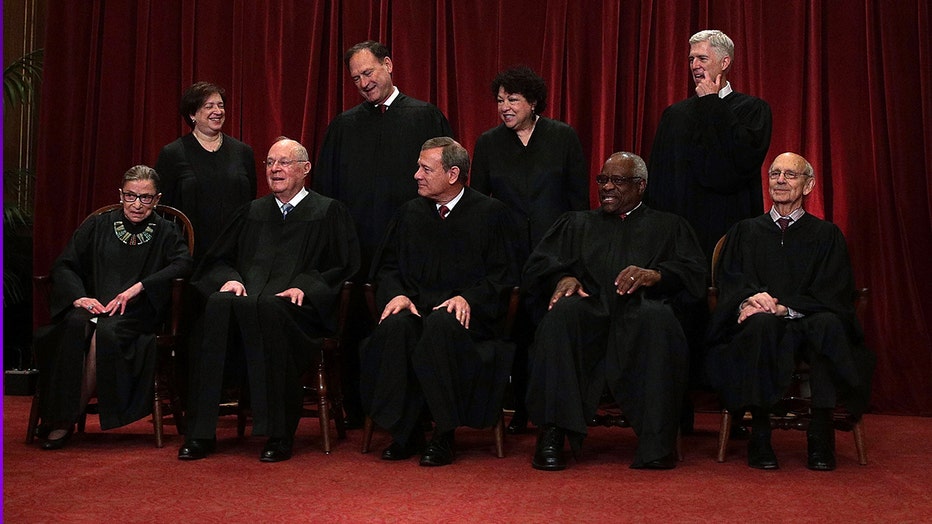 Justices posed for a group portrait in the East Conference Room of the Supreme Court June 1, 2017 in Washington, DC. (Alex Wong/Getty Images)

The current Supreme Court Justices are:

Can a Supreme Court justice be removed?

Most Supreme Court justices serve an average of 16 years, and all are appointed for life.

Federal judges can only be removed through impeachment by the House of Representatives and conviction in the Senate. “Judges and justices serve no fixed term — they serve until their death, retirement, or conviction by the Senate. By design, this insulates them from the temporary passions of the public, and allows them to apply the law with only justice in mind, and not electoral or political concerns,” WhiteHouse.gov said.

What is ‘packing the court’?

The political strategy coined “packing the court” is the concept of adding more justices to flip partisan control and secure a desired majority. Therefore, Congress could pass an act mandating a different number of justices on the bench, rather than the typical nine seats.

While nine justices have served on the bench since 1869, the concept has popped up in recent presidential debates, with the death of Justice Ruth Bader Ginsburg and confirmation hearings for President Donald Trump’s nominee Judge Amy Coney Barrett.

"You will know my opinion on court-packing when the election is over," presidential candidate Joe Biden has said. "The moment I answer that question, the headline in every one of your papers will be about that rather than focusing on what's happening now. This election has begun. There's never been a court appointment once the election has begun."

And the idea of “court packing” is not unprecedented.

The most famous example was in the late 1930s when Franklin D. Roosevelt floated the idea of increasing or “packing” the Supreme Court to 15 justices after the the court struck down the New Deal law he created to end the Great Depression.

The idea was unpopular — even among Roosevelt’s supports — and the Senate voted against the plan 70-20.