After surviving the Holocaust, Max Glauben spent much of his life ensuring the lessons from it would not be forgotten.

DALLAS - The Jewish community is mourning the death of a Holocaust survivor who helped establish a state-of-the art Holocaust museum in Dallas.

Max Glauben spent decades sharing his story at speaking engagements and advocating for a permanent memorial in Dallas.

His dream came true in 2019 when the Dallas Holocaust and Human Rights Museum opened to the public.

Glauben's own story is chronicled there about his survival at multiple concentration camps.

After surviving the Holocaust, he spent much of his life ensuring the lessons from it would not be forgotten.

He was just a child in his native Warsaw, Poland, when his family experienced the hatred of the Holocaust.

His mother and younger brother were torn away from him and sent to gas chambers. Then his father was killed too.

"Only his shoes were left on the spot where he lie, and I don't know how he was killed," Glauben previously detailed.

The nightmare that started when he was 11 ultimately took him through five concentration camps.

American soldiers liberated Glauben and he came to the U.S. an orphan.

He enlisted in the U.S. Army, met his wife, Frieda, and started a family that has continued to grow.

He would take on another mission too, working to ensure the horror of the Holocaust would not be repeated.

"That was his goal, to teach people about standing up to prejudice and hatred," Dallas Holocaust and Human Rights Museum CEO Mary Pat Higgins said. "That's the reason he did this."

Glauben helped found the earliest version of the museum in the 80s, and pushed for the creation of its permanent home in Downtown Dallas.

"As we are speaking now, it is happening in certain parts of the world, and unless we educate everybody, it's going to continue," Glauben said in September 2019.

"He understood that we could move to Downtown Dallas. We could be available for families and the broader community. He was a real advocate for that change," Higgins said.

Glauben can continue telling his story for eternity.

He answered 1,000 questions for workers who created a holographic image of Glauben as part of an interactive exhibit at the museum that answers visitors’ questions.

"He knew that he wasn't going to be able to do this work forever, but he could continue his work through the dimensions and testimony theater, which he was so proud to participate in that," Higgins said. 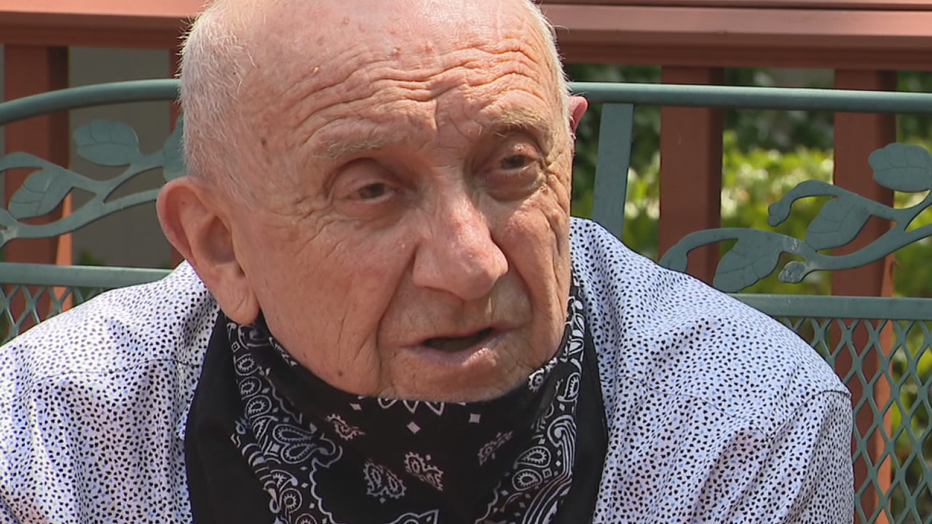 Max Glauben, 92, discusses the 75th anniversary of his liberation from the Holocaust.

RELATED: Holocaust survivor surprised outside his Dallas home on 75th anniversary of liberation

Glauben had been battling cancer.

He passed away at the age of 94, early on April 28, which is Holocaust Remembrance Day.

"I can't help but think there's some symbolism there or some reason it happened today because it's a day Max would have been thinking about his parents and his little brother," Higgins said.

And though he is gone, his story and his messages live on.