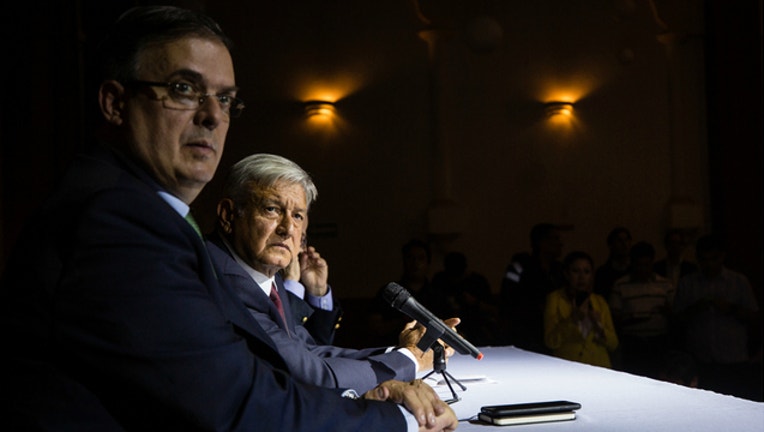 MEXICO CITY (AP) - Mexico's incoming government denied a report Saturday that it plans to allow asylum-seekers to wait in the country while their claims move through U.S. immigration courts, one of several options the Trump administration has been pursuing in negotiations for months.

"There is no agreement of any sort between the incoming Mexican government and the U.S. government," future Interior Minister Olga Sanchez said in a statement.

Hours earlier, The Washington Post quoted her as saying that the incoming administration of Andres Manuel Lopez Obrador had agreed to allow migrants to stay in Mexico as a "short-term solution" while the U.S. considered their applications for asylum. Lopez Obrador will take office on Dec. 1.

The statement shared with The Associated Press said the future government's principal concern related to the migrants is their well-being while in Mexico. Sanchez said the government does not plan for Mexico to become a "third safe country."

The Washington Post reported Saturday that the administration of U.S. President Donald Trump has won support from the Mexican president-elect's team for a plan dubbed "Remain in Mexico."

The newspaper also quoted Sanchez as saying: "For now, we have agreed to this policy of Remain in Mexico."

Sanchez did not explain in the statement why The Washington Post had quoted her as saying there had been agreement.

The White House did not immediately respond to requests for comment.

U.S. officials have said for months that they were working with Mexico to find solutions for what they have called a border crisis.

Approximately 5,000 Central American migrants have arrived in recent days to Tijuana, just south of California, after making their way through Mexico via caravan.

Tijuana Mayor Juan Manuel Gastelum on Friday declared a humanitarian crisis in his border city, which is struggling to accommodate the influx. Most of the migrants are camped inside a sports complex, where they face long wait times for food and bathrooms.

Julieta Vences, a congresswoman with Lopez Obrador's Morena party who is also president of Mexico's congressional migrant affairs commission, told the AP that incoming Foreign Minister Marcelo Ebrard has been discussing with U.S. officials how to handle a deluge of asylum claims at the border.

"They're going to have to open the borders (for the migrants) to put in the request," Vences said. "They will also give us dates, on what terms they will receive the (asylum) requests and in the case that they are not beneficiaries of this status, they will have to return here," Vences said.

She spoke to the AP after a visit to the crowded sports complex in Tijuana.