Dennis Ruhnke shares a message after being awarded a bachelor's degree at Kansas State University. He sent his extra N95 mask to New York Gov. Andrew Cuomo in March for a nurse or doctor to use.

In 1971, Dennis Ruhnke was just two credit hours shy of finishing his degree in agriculture studies at Kansas State University when his father passed away. Ruhnke chose to drop out of school to care for his mother and help maintain the family’s farm.

In March, he found five spare masks leftover from his days as a farmer — four of which were given to family members, including his sick wife.

But he sent the extra one to New York’s governor with a hand-written letter asking that it be given to a nurse or doctor in the state. New York has been the epicenter of the pandemic in the U.S. with at least 320,000 people in the state testing positive for the virus, including more than 173,000 in New York City.

“I'm a retired farmer hunkered down in northeast Kansas with my wife who has but one lung and occasional problems with her remaining lung. She also has diabetes,” Ruhnke wrote in the letter. “We are in our 70’s now and frankly I am afraid for her.”

“Enclosed, find a solitary N95 mask, left over from my farming days. It has never been used. If you could, would you please give this mask to a nurse or doctor in your state?” he wrote.

New York Gov. Andrew Cuomo said he was touched by the gesture.

Touched by the gesture, Cuomo read the letter aloud during one of his daily coronavirus briefings last month, calling the farmer’s actions a “snapshot of humanity” and “selfless.”

“You want to talk about a snapshot of humanity? You have five masks. What do you do? You keep all five? Do you hide the five masks? Do you keep them for yourselves or others? No, you send one mask to New York to help a nurse or a doctor,” Cuomo told reporters. “How beautiful is that? I mean, how selfless is that?"

“It’s that love, that courage, that generosity of spirit that makes this country so beautiful,” Cuomo added.

“Dennis’ kindness and lifelong career in agriculture make him more than qualified to receive a degree,” Kelly wrote in part on Facebook. 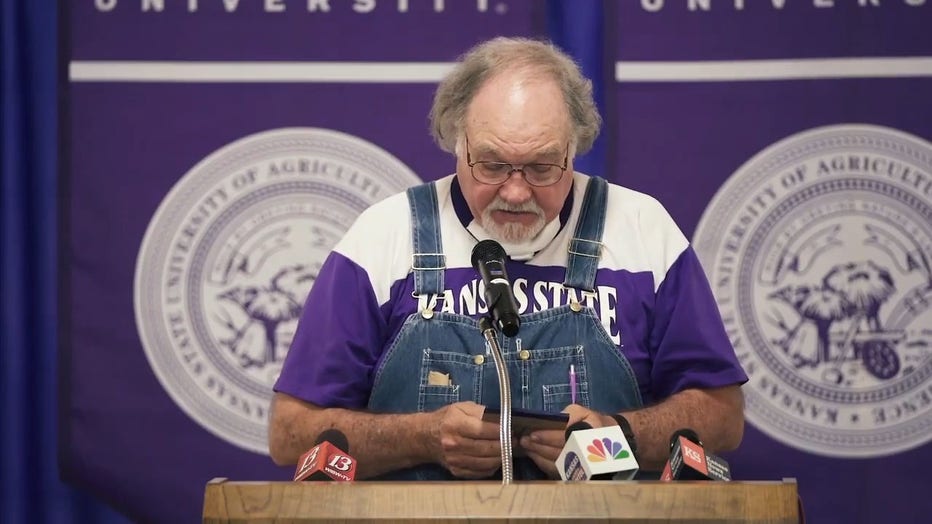 Dennis Ruhnke is pictured reading a statement after a bachelor’s degree in agriculture studies from Kansas State University was bestowed upon him. Ruhnke was only two credit hours away from finishing in 1971 when his father died and he moved home to

In a ceremony held May 5, Ruhnke shared a message about the experience while sporting a Kansas State T-shirt.

“I’ve waited half a century to receive my college degree and had pretty much resolved any chance of getting it. It would not have happened had I not mailed in that one N95 mask to Governor Cuomo for a first responder in March,” Ruhnke said. “I guess they call it karma.”

He continued: “Many of those who wrote to me asked how they could help. Just pay it forward as much as you can afford to do so to honor all those who have lost their lives to the C19 virus. And also, to honor the first responders who in some cases even lost their own lives in the line of duty, the ultimate sacrifice. Nearly half of the many letters I received said that they were moved to tears when Gov. Cuomo read my letter aloud. My life is forever changed. Special thanks to those of you who made this all happen for me.”