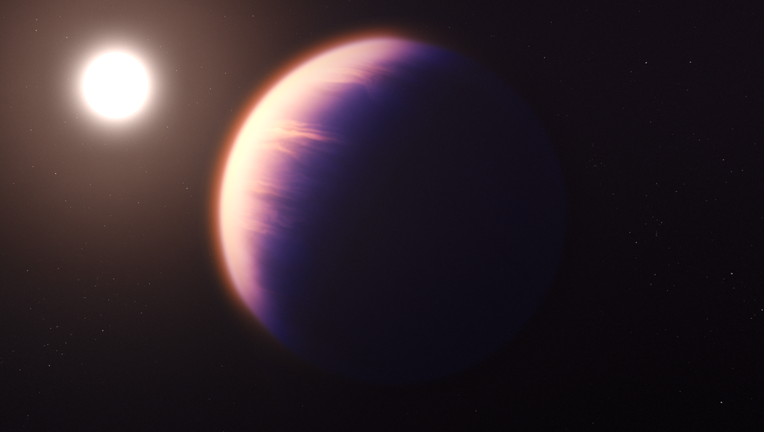 This illustration shows what exoplanet WASP-39 b could look like, based on current understanding of the planet. WASP-39 b is a hot, puffy gas-giant planet with a mass 0.28 times Jupiter (0.94 times Saturn) and a diameter 1.3 times greater than Jupite

NASA’s James Webb Space Telescope has captured the first "clear evidence" of carbon dioxide on a planet just 700 lightyears outside of our solar system.

The exoplanet, called WASP-39 b, is categorized as a gas giant by NASA and is orbiting a sunlike star. WASP-39 b has a mass roughly the same as Saturn and diameter 1.3 times greater than Jupiter, according to NASA.

Unlike our solar system’s gas giants Jupiter and Saturn, which orbit our sun from a great distance, WASP-39 b orbits its sun at about one-eighth the distance between our sun and Mercury.

WASP-39 b was first discovered in 2011 and previous observations from NASA’s Hubble and Spitzer space telescopes found that its atmosphere contained water vapor, sodium, and potassium.

"Webb’s unmatched infrared sensitivity has now confirmed the presence of carbon dioxide on this planet as well," NASA said in a statement on Thursday. 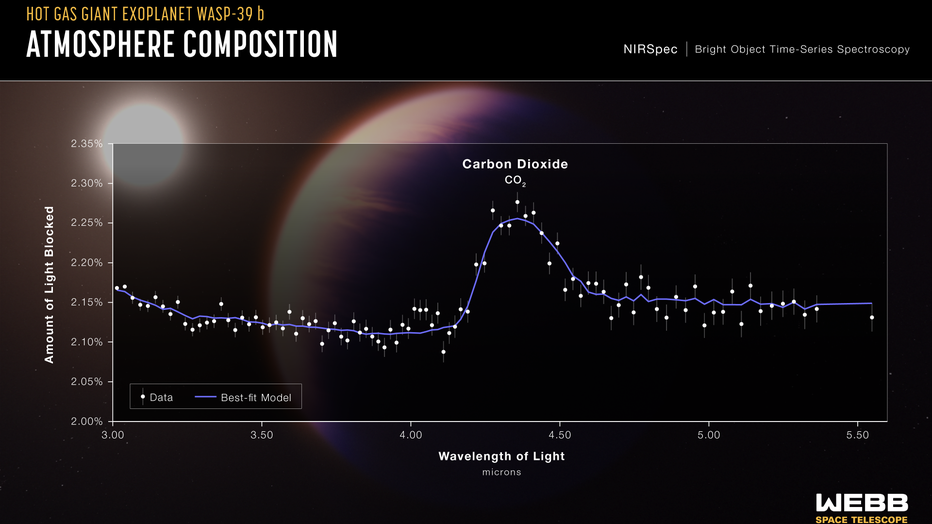 A transmission spectrum of the hot gas giant exoplanet WASP-39 b captured by Webb’s Near-Infrared Spectrograph (NIRSpec) July 10, 2022, reveals the first clear evidence for carbon dioxide in a planet outside the solar system. This is also the first d

"As soon as the data appeared on my screen, the whopping carbon dioxide feature grabbed me," said Zafar Rustamkulov, a graduate student at Johns Hopkins University and member of the JWST Transiting Exoplanet Community Early Release Science team, which undertook this investigation. "It was a special moment, crossing an important threshold in exoplanet sciences."

Why does this matter?

No telescope has been able to measure and capture the subtle differences in light and colors in a planet’s atmosphere outside our solar system like the James Webb Space Telescope. Being able to see this spectrum will allow researchers to measure the abundances of specific gases such as water and methane, NASA explained.

"Detecting such a clear signal of carbon dioxide on WASP-39 b bodes well for the detection of atmospheres on smaller, terrestrial-sized planets," said Natalie Batalha of the University of California at Santa Cruz, who leads the team.

If researchers are able to conclusively say what a planet’s atmosphere contains, it could help unlock the secrets to its origin.

"Carbon dioxide molecules are sensitive tracers of the story of planet formation," said Mike Line of Arizona State University, another member of this research team. "By measuring this carbon dioxide feature, we can determine how much solid versus how much gaseous material was used to form this gas giant planet. In the coming decade, JWST will make this measurement for a variety of planets, providing insight into the details of how planets form and the uniqueness of our own solar system."

The observations made of WASP-39 b are just the beginning, according to NASA.

The discovery of carbon dioxide on WASP-39 b is part of a larger investigation that will involve utilizing multiple instruments from Webb, as well as observations on two other exoplanets.

"The goal is to analyze the Early Release Science observations quickly and develop open-source tools for the science community to use," explained Vivien Parmentier, a co-investigator from Oxford University. "This enables contributions from all over the world and ensures that the best possible science will come out of the coming decades of observations."

The James Webb telescope is peering farther into the universe than ever before, and now, the celestial objects it’s finding along the way need names.

The International Astronomical Union, the organization tasked with naming celestial objects, is launching a contest to name 20 exoplanetary systems — or planets orbiting other stars — that the long-awaited telescope has discovered. Organizers say the contest, NameExoWorlds 2022, "invites communities across the globe to connect their own cultures to these distant worlds."

The James Webb — the world’s largest and most powerful telescope — launched in December 2021 and traveled a million miles to its final destination.

NASA shared four more images from the $10-billion telescope’s initial outward gazes, including two images of nebulas where stars are born and die in spectacular beauty and another shot showing an update of a classic image of five tightly clustered galaxies that dance around each other.

NASA released its first images from Webb in July. So far, it has vastly exceeded expectations, despite being permanently damaged by a micrometeoroid.

With Webb, scientists hope to glimpse light from the first stars and galaxies that formed 13.7 billion years ago, just 100 million years from the universe-creating Big Bang. The telescope also will scan the atmospheres of alien worlds for possible signs of life.

Heather Miller contributed to this report. This story was reported from Los Angeles.