President Joe Biden went to Portage today to the Pfizer plant where the coronavirus vaccines are being mass produced, to stave off the pandemic.

PORTAGE, Mich. - After winter weather delays postponed his trip to Michigan, President Joe Biden will tour a vaccine facility on the west side of the state Friday afternoon.

Biden's visit to the Pfizer production facility in Michigan Friday is his first trip to Michigan since being inaugurated as president in January.

The President arrived on Air Force One around 2 p.m. and quickly made his way from the plane to the waiting Presidential limousine where he was driven to the Pfizer plant in Portage. He was joined on the tour by Governor Gretchen Whitmer as he observed workers prepare vaccines to be loaded and shipped. 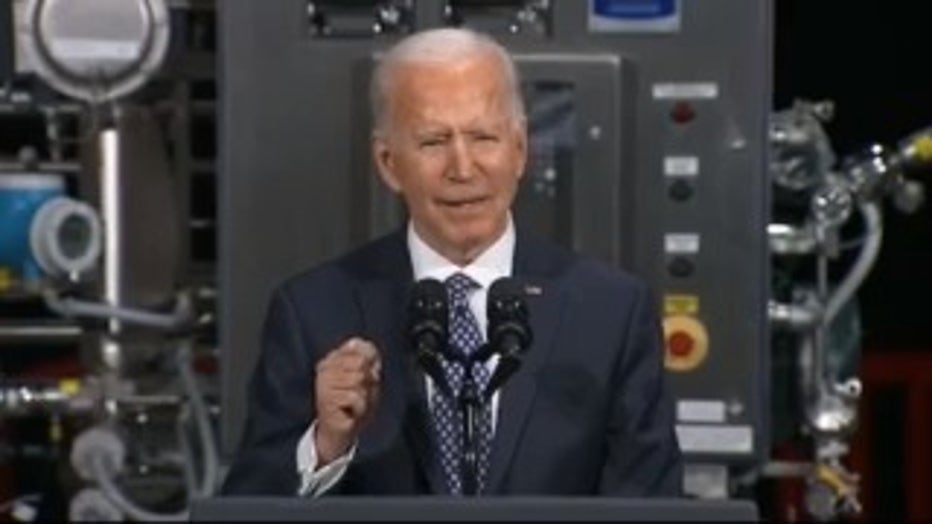 At the Michigan plant, Biden walked through an area called the "freezer farm," which houses some 350 ultra-cold freezers, each capable of storing 360,000 doses of the Pfizer-BioNtech vaccine. Double-masked, he stopped to talk with some of the workers.

The president was originally scheduled to travel to Portage earlier this week, however inclement weather of freezing temperatures and heavy snowfall delayed the trip to the end of the week.

Vaccine distribution out of Kalamazoo

As the country wages a slow-moving war with the virus, demand for a vaccine will remain high throughout the year. While the U.S. has secured hundreds of millions of additional doses, it will take months to administer all of them. The company says it

Michigan has managed to stay slightly above the average of vaccine administration, providing more than 1.5 million doses to residents and fully vaccinating some 500,000. 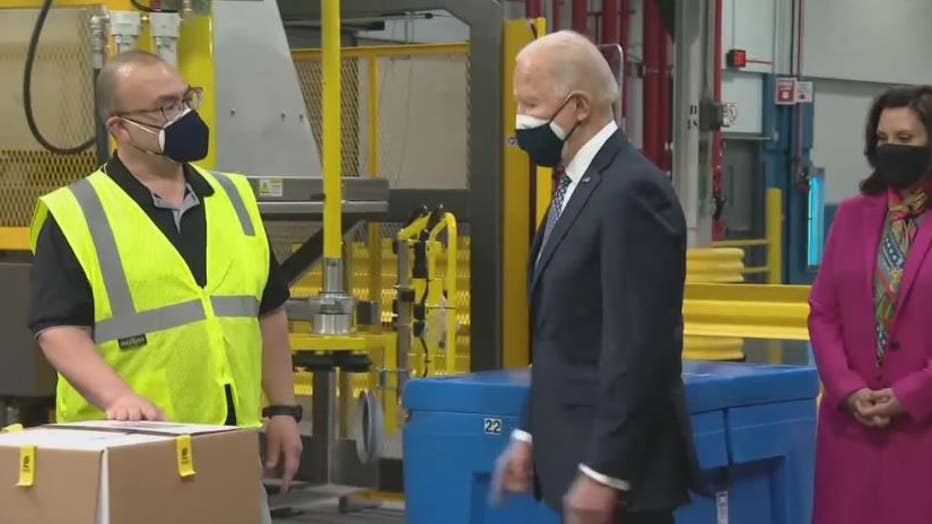 Biden's visit Friday is the first trip he's made to Michigan since taking over the presidency. Absorbing multiple crises at once, the Delaware Democrat has been busy establishing an agenda for garnering relief for the pandemic and managing the fallout of an economic crisis that's put pressure on many poor residents.

The president also promised "100 million vaccinations in 100 days" after he entered office. The federal government managed to secure several more millions of doses that promised increased treatments in the coming months.

Other companies like Johnson and Johnson and AstraZeneca have their own vaccines that are awaiting approval in the U.S., giving hope that vaccine production will ramp up even further.

It's unclear if Gov. Gretchen Whitmer plans to join Biden during his visit. She offered an ambiguous answer when asked if she would be joining the president when he traveled.

When will Biden arrive

Joe Biden landed in Kalamazoo a little before 2 p.m. and then traveled by limousine to Portage.

His schedule says he'll depart the White House in the next few hours before traveling to Kalamazoo.

He expects to be back in D.C. before the end of the day.