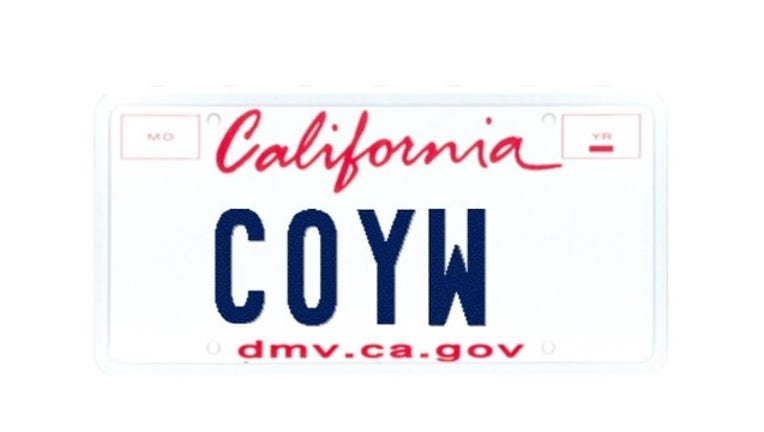 A U.S. judge ruled a soccer fan can sue the California Department of Motor Vehicles and claim it violated his freedom of speech by rejecting his request for a specialty license plate. Photo: California DMV.

SAN FRANCISCO (AP) - A U.S. judge ruled a soccer fan can sue the California Department of Motor Vehicles and claim it violated his freedom of speech by rejecting his request for a specialty license plate.

Jonathan Kotler, a devoted fan of Britain's Fulham Football Club, sued the DMV after it refused to issue him a license plate lettered "COYW," short for "Come On You Whites" and the fans' regular chant for their white-jerseyed players.

The DMV told Kotler the lettering has "connotations offensive to good taste and decency."

With thousands of differently lettered plates issued each year, "it strains believability to argue that viewers perceive the government as speaking through personalized vanity plates," the judge said about the DMV's contention.

DMV regulations define "offensive" plates as including those with any sexual connotation, as well as any term that is vulgar, racist, profane, insulting or degrading.

Wu noted in his ruling that British media refer to the Fulham club as "the Whites" while Chelsea, another London soccer club, is known as "the Blues," for the color of its jerseys. New Zealand's national rugby team is the "All Blacks."

In court filings, state lawyers argued that the public knows the DMV approves messages on license plates and would assume that those messages came from the state.