Starr died at a hospital Tuesday of complications from surgery, according to his former colleague, attorney Mark Lanier.

WASHINGTON (AP) - Ken Starr, a former federal appellate judge and a prominent attorney whose criminal investigation of Bill Clinton led to the president’s impeachment and put Starr at the center of one of the country’s most polarizing debates of the 1990s, has died at age 76, his family said Tuesday.

Starr died at a hospital Tuesday of complications from surgery, according to his former colleague, attorney Mark Lanier. He said Starr had been hospitalized in an intensive care unit in Houston for about four months.

For many years, Starr’s stellar reputation as a lawyer seemed to place him on a path to the Supreme Court. At age 37, he became the youngest person ever to serve on the U.S. Court of Appeals for the District of Columbia Circuit, where Chief Justice John Roberts and justices Ruth Bader Ginsburg, Clarence Thomas and Antonin Scalia also had served. From 1989-93, Starr was the solicitor general in the administration of President George H.W. Bush, arguing 25 cases before the Supreme Court.

Roberts said Tuesday: "Ken loved our country and served it with dedication and distinction. He led by example, in the legal profession, public service, and the community." 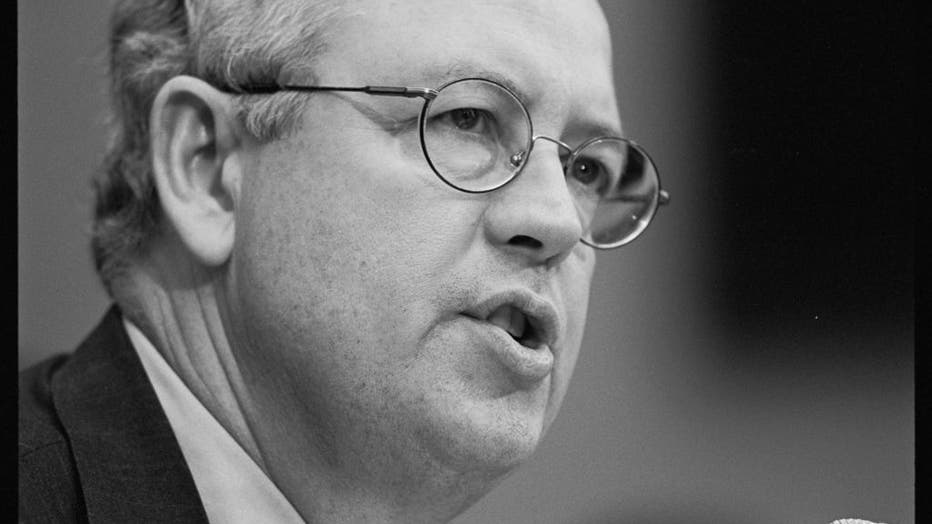 Despite his impressive legal credentials, nothing could have prepared him for the task of investigating a sitting president.

In a probe that lasted five years, Starr looked into fraudulent real estate deals involving a long-time Clinton associate, delved into the removal of documents from the office of deputy White House counsel Vincent Foster after his suicide and assembled evidence of Clinton’s sexual encounters with Monica Lewinsky, a former White House intern. Each of the controversies held the potential to do serious, perhaps fatal, damage to Clinton’s presidency.

As Clinton’s legal problems worsened, the White House pilloried Starr as a right-wing fanatic doing the bidding of Republicans bent on destroying the president. 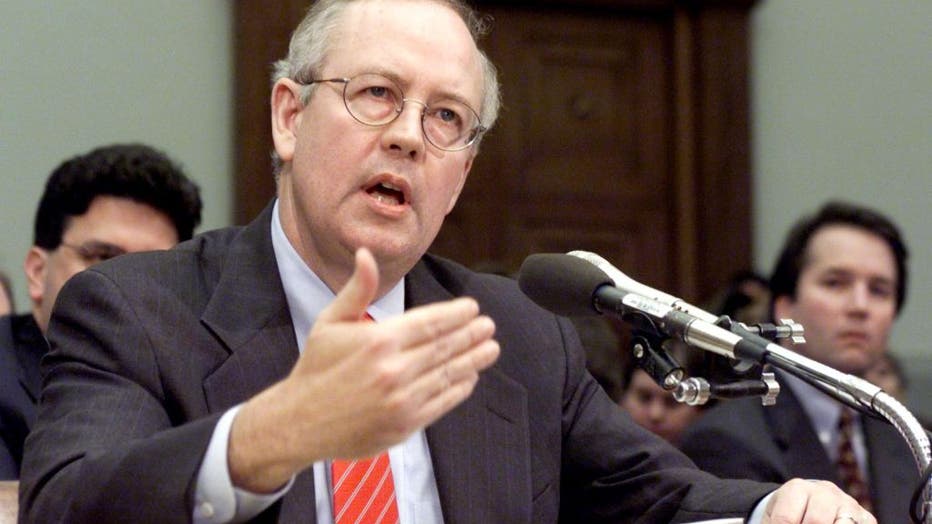 Independent Counsel Kenneth Starr testifies before the House Judiciary Committee on Impeachment Inquiry 19 November on Capitol Hill in Washington DC. Starr is expected to testify that US President Bill Clinton misused "the machinery of government" to

"The assaults took a toll" on the investigation, Starr told a Senate committee in 1999. "A duly authorized federal law enforcement investigation came to be characterized as yet another political game. Law became politics by other means."

In a bitter finish to his investigation of the Lewinsky affair that engendered still more criticism, Starr filed a report, as the law required, with the U.S. House of Representatives. He concluded that Clinton lied under oath, engaged in obstruction of justice and followed a pattern of conduct that was inconsistent with the president’s constitutional duty to faithfully execute the laws. House Republicans used Starr’s report as a roadmap in the impeachment of the president, who was acquitted in a Senate trial.

In 2020, he was recruited to help represent Trump in his first impeachment trial. In a memorable statement to Congress, Starr said "we are living in what I think can aptly be described as the ‘age of impeachment.’" He said that "like war, impeachment is hell, or at least presidential impeachment is hell."

Clinton’s legal problems began during the 1992 presidential campaign. Questions arose over the candidate’s ties to the owner of a failed Arkansas savings and loan. The issue faded quickly. But it caught the attention of federal regulators, who began looking into whether money from the S&L had been diverted to a real estate venture called Whitewater in which Bill and Hillary Clinton and the S&L’s owner, Jim McDougal, shared a financial interest.

Bowing to intense political pressure from Republicans and some members of his own party, Clinton called for appointment of a special counsel to investigate Whitewater. A three-member appeals court for independent counsels selected Starr.

On the Whitewater front, Starr’s prosecutors investigated Mrs. Clinton’s legal work for Jim McDougal’s S&L. Both she and the president were questioned by Starr’s prosecutors and their videotaped depositions were played for juries in criminal trials of McDougal and his ex-wife Susan. Neither of the Clintons was ever charged in connection with Whitewater.

The investigation of Clinton’s intimate relationship with Lewinsky was a Washington spectacle.

In 1995, Lewinsky went to work at the White House as an intern. During the government shutdown late that year, she and Clinton had a sexual encounter in a hallway near the Oval Office, the first of 10 sexual encounters over the next year and a half. Lewinsky confided the affair to a co-worker, Linda Tripp, who tape-recorded some of their conversations and brought the tapes to Starr’s prosecutors. Lewinsky was granted immunity from prosecution and became Starr’s chief witness against the president, who had denied having sexual relations with her.

Putting the investigation behind him, Starr embarked on a career in academia, first as dean of the law school at Pepperdine University where he taught constitutional issues and civil procedures, then as president of Baylor University in his home state of Texas. He also became an author, writing "First Among Equals: The Supreme Court in American Life." 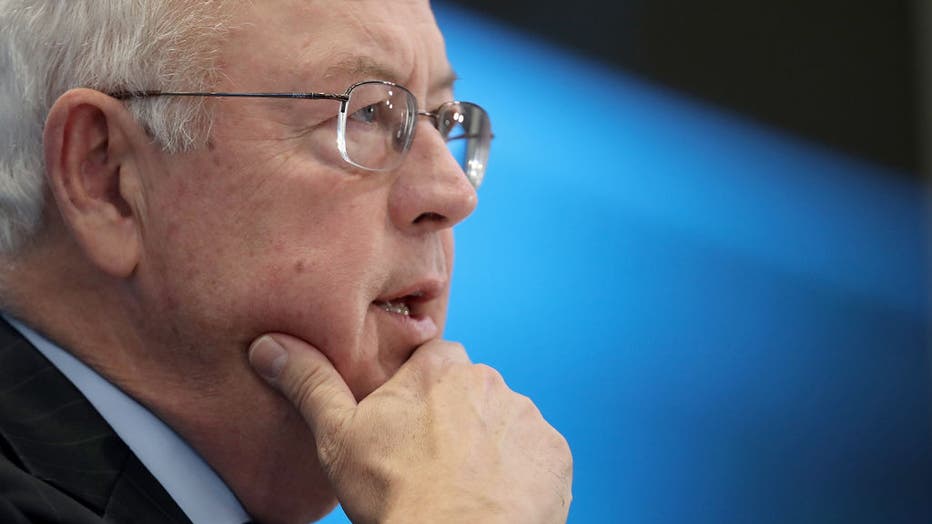 Former Independent Counsel Ken Starr answers questions during a discussion held at the American Enterprise Institute September 18, 2018 in Washington, DC. Starr spoke on the topic of "Special Counsels and the Presidency: A Conversation with Ken Starr

Starr was demoted from the presidency at Baylor in 2016 amid a sex assault scandal that rocked the Big 12 school and its football program, as women alleged campus leaders at the nation’s largest Baptist school bungled or ignored their assault complaints. Baylor eventually settled with several women who filed a cascade of lawsuits, including a case where the victim of a 2015 attack accused Baylor of fostering a "hunting ground for sexual predators."

The school’s board of regents allowed Starr to stay on as chancellor and law school professor, jobs that carried no "operational" duties at Baylor. He resigned altogether a few months later. Football coach Art Briles also was fired.

A review commissioned by the school found that under Starr, school administrators discouraged students from reporting or participating in student conduct reviews, and even contributed to or accommodated a "hostile" environment against the alleged victims.

In a statement, Starr apologized to "those victims who were not treated with the care, concern, and support they deserve."

Starr was born in Vernon, a small Texas town near the Oklahoma state, and raised in San Antonio. He earned his B.A. from George Washington University in 1968, his M.A. from Brown University in 1969 and his J.D. degree from Duke University Law School in 1973. He was a law clerk to Chief Justice Warren E. Burger from 1975 to 1977.

As a young attorney at the law firm of Gibson, Dunn & Crutcher in Los Angeles, Starr worked with William French Smith, who became attorney general in the administration of President Ronald Reagan. Starr became counselor to Smith, and from there was nominated by Reagan to the federal appeals court.