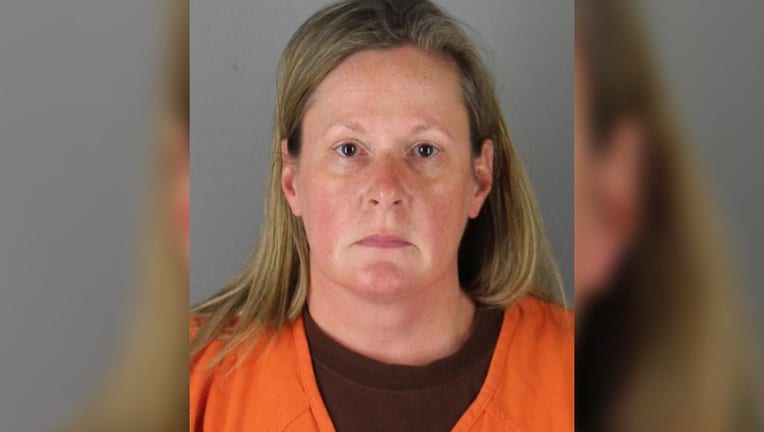 Potter was arrested by agents with the Minnesota Bureau of Criminal Apprehension at 11:30 a.m. at BCA headquarters in St. Paul. She was booked into the Hennepin County Jail in Minneapolis at 12:07 p.m. By 5:38 p.m. Potter was released from jail after posting bond, according to online jail records.

The prosecution requested for bail to be set at $100,000 without conditions or $50,000 with conditions. The conditions of her release include surrendering her passport, remaining in Minnesota, no firearms and to remain law abiding.

Potter's first court appearance is scheduled for Thursday at 1:30 p.m.

Kim Potter resigned Tuesday along with Police Chief Tim Gannon. The chief said he believes Potter mistakenly grabbed her gun instead of her taser when she shot Wright during a traffic stop on Sunday afternoon.

The charges also state Potter was the field training officer for another officer when the incident happened.

Attorney: 'This was no accident'

Civil rights attorney Ben Crump, who represents the family of Daunte Wright, issued the following statement on the manslaughter charge:

"While we appreciate that the district attorney is pursuing justice for Daunte, no conviction can give the Wright family their loved one back. This was no accident. This was an intentional, deliberate, and unlawful use of force.  Driving while Black continues to result in a death sentence. A 26-year veteran of the force knows the difference between a taser and a firearm. Kim Potter executed Daunte for what amounts to no more than a minor traffic infraction and a misdemeanor warrant. Daunte’s life, like George Floyd’s life, like Eric Garner’s, like Breonna Taylor’s, like David Smith’s meant something. But Kim Potter saw him as expendable. It’s past time for meaningful change in our country. We will keep fighting for justice for Daunte, for his family, and for all marginalized people of color. And we will not stop until there is meaningful policing and justice reform and until we reach our goal of true equality."

Tuesday morning, the families of George Floyd and Daunte Wright gathered together to make their voices heard and call for justice in both cases.

Charging decisions were passed on to the Washington County Attorney’s Office from the Hennepin County Attorney's Office to avoid the appearance of a conflict of interest. However, Brooklyn Center Mayor Mike Elliott is calling for the governor to hand the case over to Attorney General Keith Ellison for prosecution. Currently, there is no mechanism for the Attorney General to just step in and prosecute.

Why was Daunte Wright pulled over?

The incident started shortly before 2 p.m. Sunday on the 6300 block of Orchard Avenue in Brooklyn Center. Officers stopped a vehicle for expired tabs and learned the driver, Wright, had a warrant for a gross misdemeanor. They tried to arrest him, but he got back into his vehicle. At that point, the officer fired her gun, hitting Wright, who then drove several blocks before crashing into another car.

Wright was pronounced dead at the scene. A woman in the car was hurt in the crash, but is expected to survive.

Daunte Wright shooting bodycam video was released April 12 by the Brooklyn Center, Minnesota Police Department. Brooklyn Center Police Chief Tim Gannon said it was an accidental discharge, that the officer who shot Wright had intended to reach for a taser, but discharged a handgun instead.

Bodycam footage showed the moments leading up to the deadly shooting, including when Potter yelled, "Taser, Taser," before shooting her gun. After firing, Potter can be heard saying, "S---, I just shot him." The Brooklyn Center Police Chief said Monday that he believes she mistook her gun for her Taser.

Daunte Wright shooting bodycam video was released April 12 by the Brooklyn Center, Minnesota Police Department. Brooklyn Center Police Chief Tim Gannon said it was an accidental discharge, that the officer who shot Wright had intended to reach for a taser, but discharged a handgun instead.

The Minnesota Bureau of Criminal Apprehension is investigating the deadly shooting.