Firefighters are working to save multimillion-dollar homes after a fire erupted in Orange County.

LAGUNA HILLS, Calif. - More than a dozen multimillion-dollar mansions have been damaged and/or destroyed after a wildfire erupted in Laguna Niguel Wednesday afternoon.

The Coastal Fire swept through a prestige neighborhood in Laguna Niguel prompting hundreds of households to evacuate and destroying multimillion-dollar homes. The blaze erupted at 2:44 p.m. Wednesday, in the brush in Aliso Wood Canyon between Laguna Niguel and Laguna Beach.

During a press conference held on Thursday evening, the Orange County Sheriff's Department revealed 20 homes were destroyed and 11 other structures were damaged during the previous night's fire. The fire left two firefighters hurt but both are expected to recover.

Residents describe losing their homes to the Costal Fire

As of Thursday morning, Captain Virgil Asuncion who serves as the Chief of Police Services for the city of Laguna Niguel, said 900 homes are under evacuation orders.

The wind and terrain-driven fire marched relentlessly through an enclave of multimillion-dollar estates on the hillside overlooking the ocean, leading to evacuations of dozens of residents and high school students in the community.

According to the Orange County Sheriff’s Department, mandatory evacuations were issued for three streets in Laguna Niguel: Coronado Pointe, Vista Court, and Via Las Rosas. There are at least 100 structures on those streets and all roads leading to the area were closed.

One resident returned to his home to assess the damage to his home, located in a gated community on Coronado Pointe on Thursday morning.

Some of the homes that were destroyed or damaged by the blaze are located on Aliso Summit Trail, Coronado Pointe, La Vue, Vista Montemar, Clubhouse Dr. and Coronado Ct.

Images from SkyFOX on Wednesday evening showed several homes consumed by heavy flames. Multiple roofs, garages and patios had collapsed. The flames continued to jump from house to house. Multiple homes were completely gutted, leaving only the frame of the house standing. 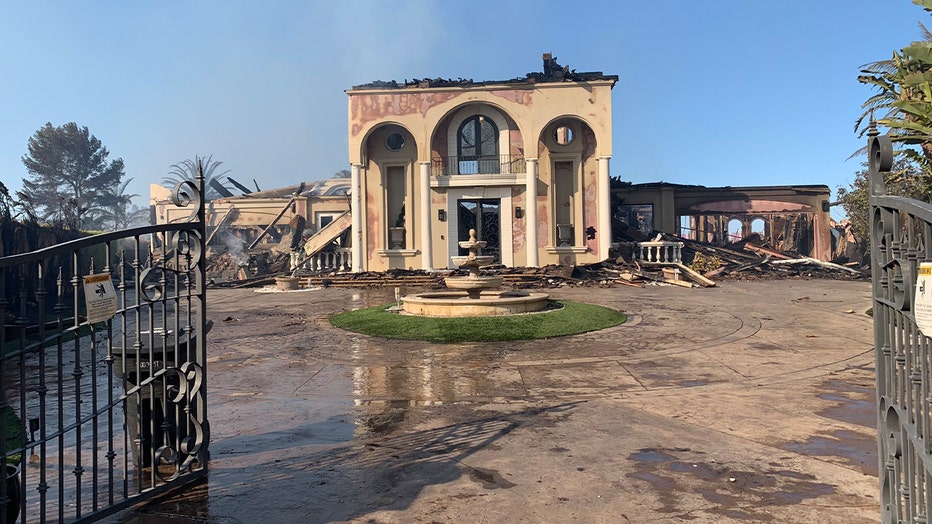 A $10 million home at 5 Vista Court in Laguna Niguel was destroyed by the Coastal Fire. (Photo: Mario Ramirez)

An evacuation zone was set up at 29751 Crown Valley Parkway.