The Long Beach Police Department is investigating after a 12-year-old boy reported he was targeted in an unprovoked assault on a transit bus.

LONG BEACH, Calif. - The Long Beach Police Department is investigating after a 12-year-old boy reported he was targeted in an unprovoked assault on a transit bus.

The incident happened Sunday at around 1:48 p.m. while a transit bus was parked at a bus stop at the corner of Atlantic Avenue and Carson Street.

The victim's father, Billy Brown, spoke to FOX 11 along with his son, who is not being identified for the report.

His son said the man tapped him on the shoulder.

"He was just mad and he started hitting me and stuff in the head. I tried to protect myself and I tried to block some of the hits, but I couldn't block all of them," said the 12-year-old.

The victim said no one stepped in to help him during the altercation though the bus was still parked. He said the suspect grabbed his bag and walked off of the bus afterward.

"I've never been in a situation with a grown man trying to hit me in my life. I remember when I was getting hit, I was like where's the bus driver? There was only one dude who [after the attack] said, ‘Do you want to call the police or press charges?’" he said.

The victim said he was still in shock following the attack and told the man he wanted to get to his grandmother's house.

"When I was walking back [after getting off of the bus], I was kind of worried so I was looking around to see if he [the suspect] followed me or something," he said.

The 12-year-old said he was hit multiple times on his head and mouth.

"I couldn't see what was going on at first because he attacked me from the back. I wasn't looking or paying attention at all. I wasn't aware of my surroundings which I should have been doing but I wasn't doing that at all that day," he said.

He questions why he was targeted on the bus.

"Once he was done hitting me, I was like, 'Why was I being attacked out of all the people?' I'm a child. I probably might be tall but I don't look like an adult. I don't have any adult features on me at all yet," he said.

Brown serves as a community activist, often speaking out about the crime, and is very upset no one helped his son.

"I deal with violence, intervention and prevention so for this to happen to my son, I'm like, hold on a 12-year-old boy got attacked by a 40-year-old male and no one did anything? No one is explaining to me protocol as far as how they deal with that. The guy sucker-punched my son and hit him right in the face and just got to whaling on my son for no reason and of course, this is disturbing. My son tells me that the guy then grabbed his shirt and slung him around to the other side of the bus and continued to beat on him and all this time, there are passengers on the bus and there's a bus driver, and no one does anything to intervene," Brown said.

Brown said the bus is the same one his son takes to school daily.

"It's just really disturbing to know that this is the same bus he takes every day to go to school," said Brown.

Brown and his son said they are grateful the suspect did not have a gun or a knife, but they want the case investigated as a potential hate crime.

"He was the only Black passenger on there [the transit bus]. I just asked the people who are investigating to take this on as if it was a hate crime, as if any other entity or ethnicity is involved. To handle it the way you would respond to that. I want you to respond to my son being attacked by a grown man and no one is doing anything about it," said Brown.

A spokesperson for the Long Beach Police Department said they were dispatched to the Public Safety Building the next day and contacted the 12-year-old victim regarding the incident. The investigation is in its preliminary stages but they are working with Long Beach Transit to identify the suspect.

Police released the following images of the suspect. He is described as a Hispanic man in his 30s, approx. 5'10", heavyset, short brown hair, and a goatee. 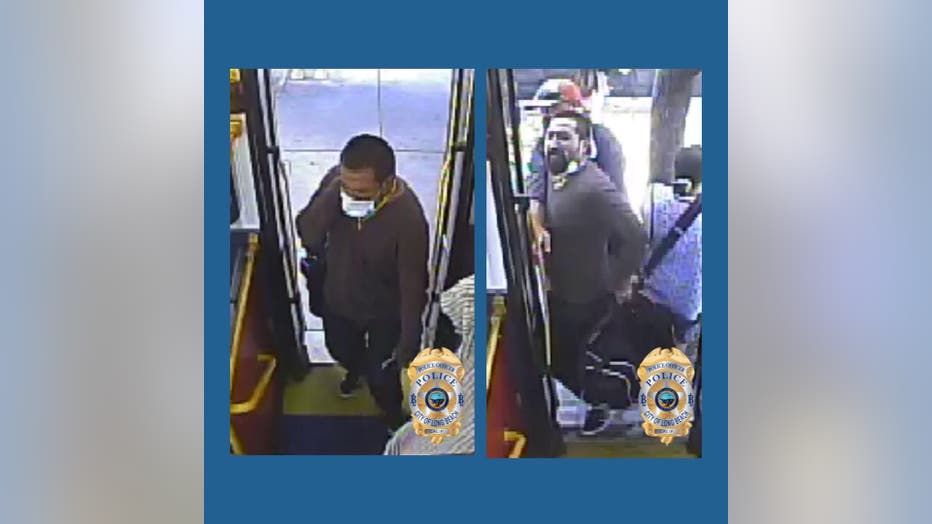 At that point, the bus continued on its way.

As I noted, the video footage has been given to the Long Beach Police Department."