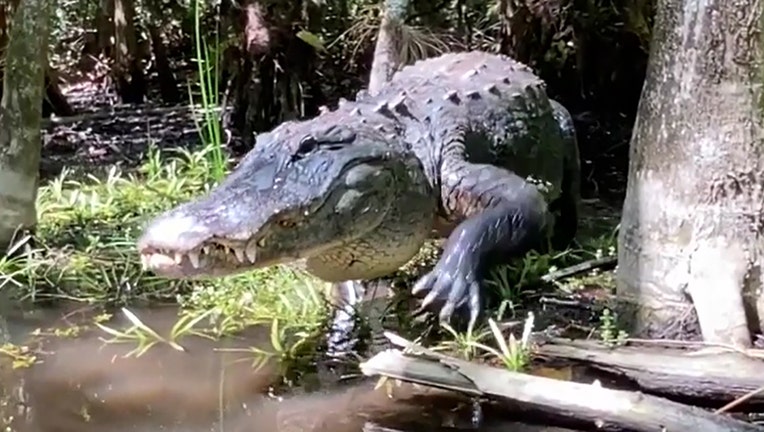 TAMPA, Fla. - It's that time of the year. The Florida temperatures become noticeably hotter and alligators are roaming around to find their mate.

It's gator mating season, and, according to state wildlife officials, it typically begins in May or June with courtship beginning in early April.

By late June or early July, female gators will lay between 32 to 46 eggs. Incubation periods for alligators requires about 60-65 days, and baby gators will be born in late August or early September, according to the Florida Fish and Wildlife Conservation Commission.

With the warmer temperatures, it means there will be more alligator sightings.

Earlier this week, a Seffner woman captured video of a massive alligator roaming around an intersection.

Off of "Alligator Alley," a large alligator was -- fittingly -- seen roaming around the interstate.

The Florida Highway Patrol spotted an alligator taking a stroll alongside 'Alligator Alley.

In Manatee County, deputies had to remove a 9-foot gator from a county road last week. It was relocated to an alligator farm after officials said it was "being aggressive with traffic."

"It's gator mating season. This means they could be more mobile and aggressive than usual," according to a sheriff's office Facebook post.

Another 9-foot gator was discovered in a Tampa homeowner's pool in mid-April. That night the FWC-licensed trapper told FOX 13 it was his third gator capture of the night.

He reminded Floridians that alligators typically move around at night. If you see one, he asks that you call your local law enforcement agency.

Alligators are found in all 67 Florida counties, FWC says, and there is still a potential for conflict between human and reptile.

"Because of their predatory nature, alligators may target pets and livestock as prey," FWC said. "Unfortunately, people also are occasionally bitten."

FWC provided the following safety tips when it comes to alligators:

Generally, alligators less than four feet in length are not large enough to be dangerous unless handled. However, if you encounter any alligator that you believe poses a threat to people, pets or property, call the Nuisance Alligator Hotline at 866-FWCGATOR (866-392-4286). Please be aware, nuisance alligators are killed, not relocated.

Be aware of the possibility of alligators when you are in or near fresh or brackish water. Bites may occur when people do not pay close enough attention to their surroundings when working or recreating near water.

Do not swim outside of posted swimming areas or in waters that might be inhabited by large alligators.

Alligators are most active between dusk and dawn. Therefore, avoid swimming at night.

Dogs and cats are similar in size to the natural prey of alligators. Don’t allow pets to swim, exercise or drink in or near waters that may contain alligators.

Dogs often attract an alligator’s interest, so do not swim with your dog.