Groups of looters move downtown in Minneapolis. Among the stores hit includes Sak's Off Fifth along the Nicollet Mall.

MINNEAPOLIS (FOX 9) - Groups of people looted multiple stores in downtown Minneapolis. This happened after a homicide suspect took his own life on Nicollet Mall, according to Minneapolis police. 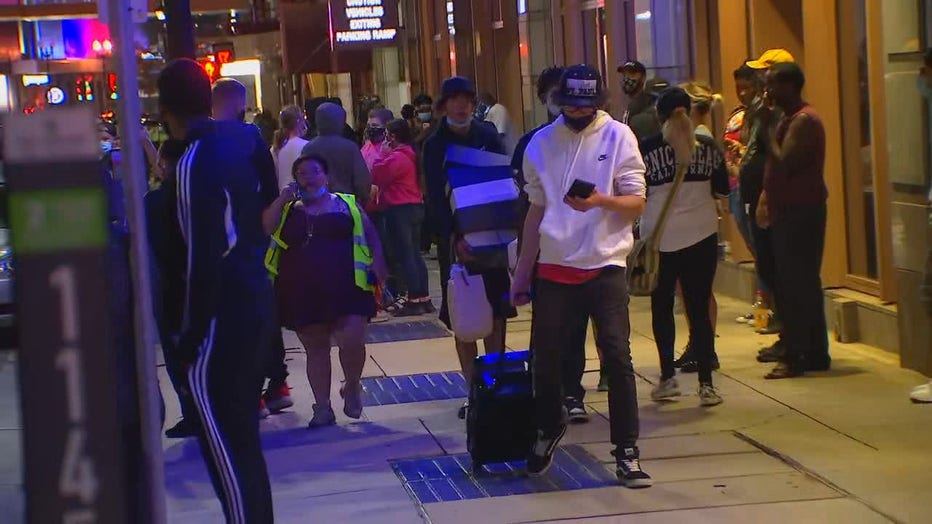 Apparent looters make off with merchandise from Saks Off Fifth Wednesday night.

Social media posts show images of people damaging items in a Target as well as broken windows of surrounding stores. Haskell's liquor store, the Medical Arts building and Nordstrom were also looted earlier in the evening.

Later Wednesday, people were seen looting a Saks Off 5th location until police dispersed the crowd with tear gas.

According to Department of Corrections Commissioner Paul Schnell, law enforcement are working to restore the calm in the downtown. Schnell said people have thrown bottles and set off commercial grade fireworks and there have been reports of shots fired.

The Hennepin County Sheriff’s Office is among the law enforcement groups responding to the looting.

“We’ve got cops from all over the Twin Cities coming out here to maintain order because the citizens of Minneapolis and Hennepin County deserve to feel safe,” said Hennepin County Sheriff Dave Hutchinson. “The people causing problems are going to go to jail tonight.”

According to Metro Transit, light rail service on the Blue and Green lines was stopped going into downtown Minneapolis. Trains and buses will not be serving the area until further notice.

In the aftermath of the suicide, people gathered around the scene and rumors spread on social media that the man was shot by police.

To refute the rumors, Minneapolis police held a press conference and shared video of the incident from a city surveillance camera. FOX 9 has reviewed city camera video provided by Minneapolis police which appears to show the suspect in the Ramp A homicide shooting himself.

The suspect was being followed by police in connection to a deadly shooting that happened just hours before at a parking ramp downtown.

Gov. Tim Walz called for an end to the unrest Wednesday night, saying he has deployed the Minnesota State Patrol to the city to help quell tensions.

Minneapolis Mayor Jacob Frey retweeted Walz's words and called for the unrest to stop and said, "Destruction will not be tolerated."