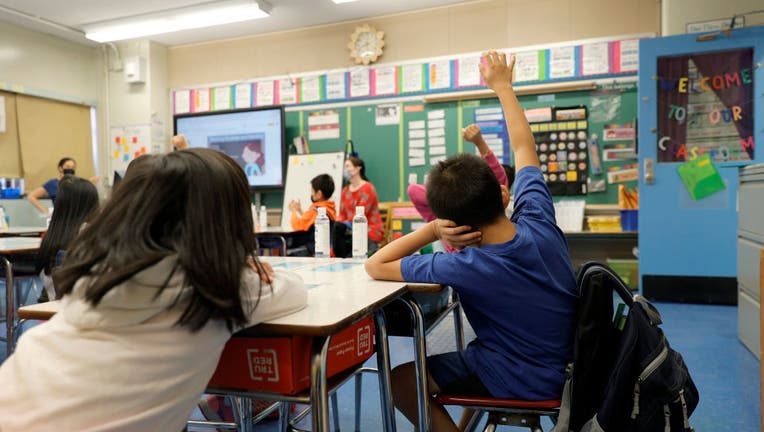 NEW YORK, NEW YORK - SEPTEMBER 27: (L-R) Co-teachers at Yung Wing School P.S. 124 Marisa Wiezel (who is related to the photographer) and Caitlin Kenny give a lesson to their masked students in their classroom on September 27, 2021 in New York City. N

Keeping students engaged is a major stress factor for teachers, but a new survey highlights other sources for stress as well.

The EdWeek Research Center surveyed 630 teachers across the country for its December report. Of the respondents, 68% cited low student engagement as the biggest challenge facing education today. Behavioral problems (59%), student quarantines (55%) and student mental health needs (54%) were cited as other problems as well.

Teachers said the problems existed before 2020, but the COVID-19 pandemic exacerbated the issue with remote learning, hybrid in-person learning and frequently adjusting to COVID-19 protocols.

"We’re still in a pandemic," Stephanie Andrews, executive director of student and family support services for the Tulsa Public Schools, told EdWeek. "This is not going to be a fast fix."

In a video, which has quickly gained national attention, a fourth-grade teacher is shown holding a mirror while her students say positive affirmations to themselves. (Credit: Cierra Levay Broadway, @levaymusic)

Teachers cited, in addition, students are facing challenges at home including stress from the fear of getting sick or their parents getting sick and lacking the structure in-person schooling provides.

Yvonne Alexander, a science teacher at Hopkins Junior High School in Fremont, Calif., told the center that she allows students to move their desks around the classroom. They’re also welcome to step out of the classroom to alleviate anxiety. She also leads more classroom activities where students can work together.

"We want to be productive," she said. "I have faith that humans are resilient, but we have to give them a space to be safely resilient in and fall apart, literally just go ahead, and let’s just fall apart."

The Dallas Independent School District has hired more than 50 new mental health clinicians for students, according to EdWeek.

Based on declining enrollment at teaching colleges and surveys of teachers about their future plans, shortages are likely to become more widespread, affecting regions and subject areas that traditionally have not been affected, said Jacqueline King, a researcher with the American Association of Colleges for Teacher Education.

"What we seem to be seeing now is more widespread shortages in areas like elementary education and secondary English," King said. "These weren’t fields that previously we thought, ‘Oh, there’s a big shortage there.’"

For the longer term, states have identified needs to invest in strategies to bolster the teacher pipeline. State officials outlined plans to improve teacher recruitment and retention in applications last year for federal COVID-19 relief money. They include fostering teacher aides to qualify them for classroom teaching vacancies and subsidizing college tuition.

The stresses of working through the pandemic threaten to further thin the ranks of educators. A survey of National Education Association members conducted in January released this week found 55% planned to leave education sooner than planned because of the pandemic, up from 37% in August.