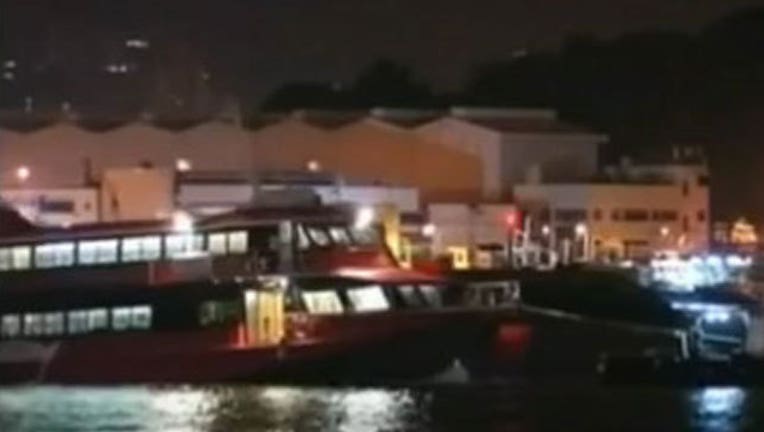 HONG KONG (AP) — More than 120 people were injured when a high-speed ferry traveling from the Asian gambling hub of Macau to Hong Kong slammed into an object floating in the water, authorities said Monday.

The hydrofoil, carrying 163 passengers and 11 crew members, hit an "unidentified object" off a small island in Hong Kong's western waters Sunday evening, rescuers said. The ferry lost power after the collision, but it was not in any danger of sinking, they said.

As of 7 a.m. Monday, the injury count stood at 124, including five people in critical condition, Hong Kong's Hospital Authority said.

TV news channels showed passengers, some with bandages on their heads, arriving at a Hong Kong pier and being taken to waiting ambulances.

It was the fourth accident in two years on the busy hour-long ferry route between the coastal Chinese territories of Macau and Hong Kong. Vessels depart around every 15 minutes on the route, which operates around the clock, taking passengers from the Asian financial center of Hong Kong to Macau, a former Portuguese colony now known mainly for its glitzy casinos.

In a similar accident in November 2013, 87 people were hurt when a Macau hydrofoil hit a floating object off an outlying Hong Kong island. Last year, a ferry hit a breakwater in Macau's harbor and another collided with a mainland Chinese cargo ship in separate incidents that left dozens injured.

Hong Kong's nautical safety has been in the spotlight since the city suffered its biggest maritime tragedy in decades in 2012 when a boat and commuter ferry collided, killing 39 people and injuring about 100.