A man claimed in a group text to his family that he posed as ‘antifa’ and harmed several police officers during the Capitol Riot on Jan. 6, federal court documents show.

In text messages obtained by the Federal Bureau of Investigations, William Robert Norwood III, seen in the text screenshots as Robbie, claimed to have participated in the Capitol riot and stolen police gear while posing as an ‘antifa.’ Antifa stands for anti-fascism.

On Jan. 7, Norwood sent a message to a group text thread that read, "It worked... I got away with things that others were shot or arrested for," according to court documents. 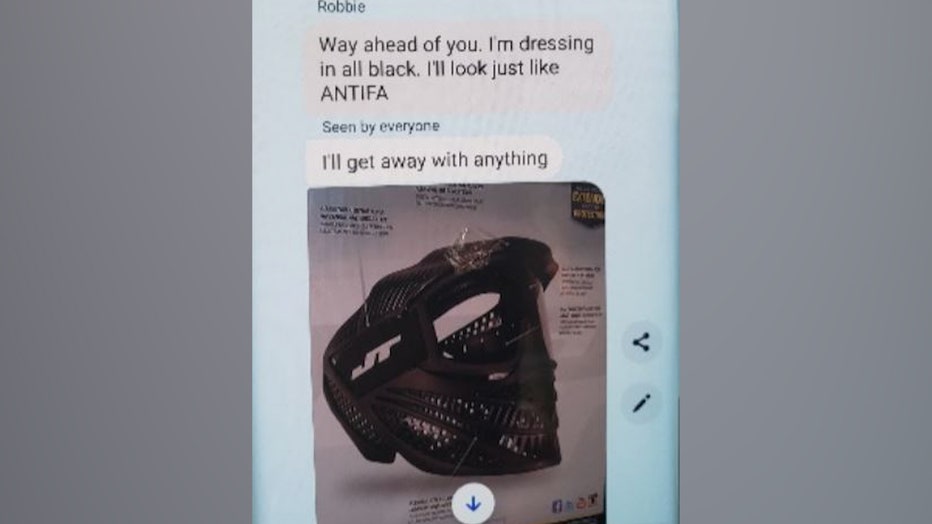 Norwood allegedly texting family he will post as ANTIFA. 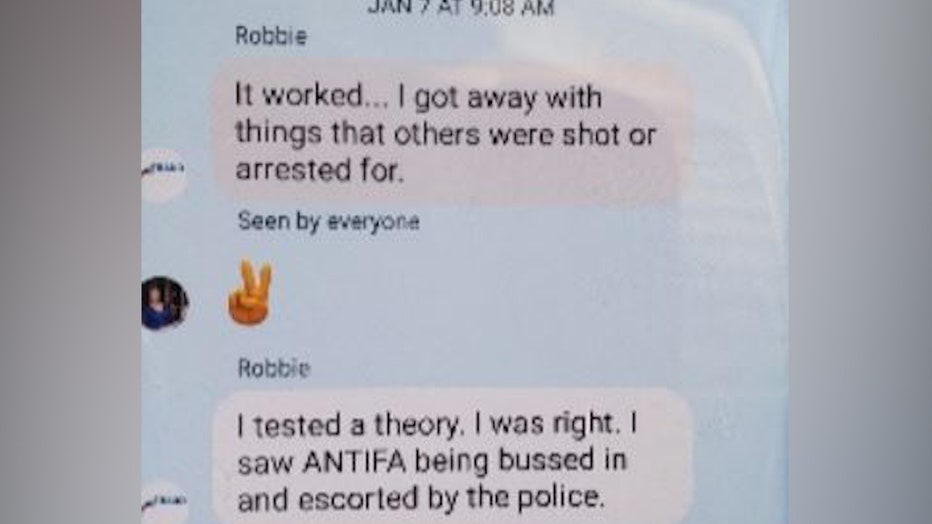 Texts messages from Norwood to family obtained by the FBI.

RELATED: Capitol Police increasing security ahead of March 4 due to ‘concerning information and intelligence’

Court documents show Norwood’s communication with his family began a day before the attack. On Jan. 5, Norwood texted his family that he was planning to dress in all black, saying "I’ll look just like ANTIFA. I’ll get away with anything."

Then, the morning of Jan. 7 - a day after the riot - Norwood sent another text to the group chat saying "it worked."

"I tested a theory. I was right. I saw ANTIFA being bussed in and escorted by the police," he texted, at one point also claiming the police were "ordered to allow Antifa to get away with anything" which is why his plan worked. 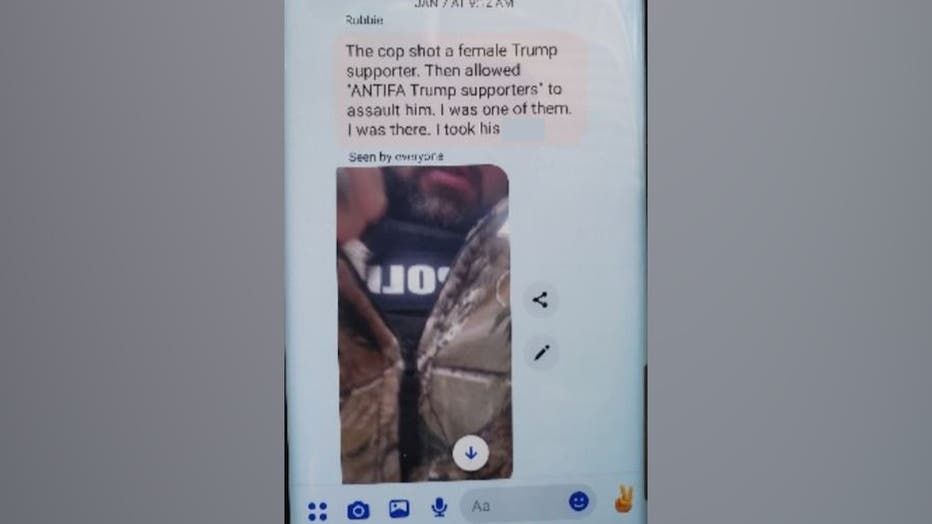 Text message showing a person who appears to be Norwood wearing police gear underneath camo clothing. 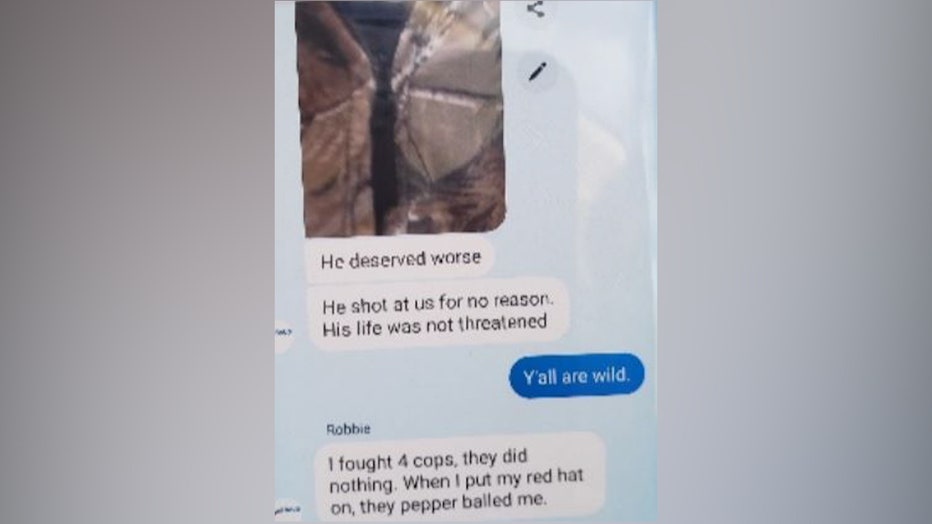 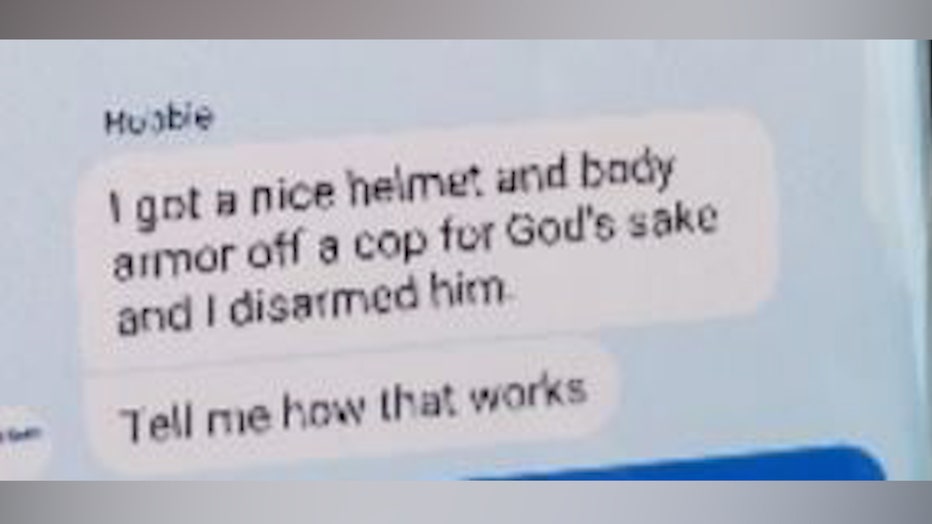 Norwood texts obtained by the FBI.

"The cop shot a female Trump supporter. Then allowed ‘ANTIFA Trump supporters’ to assault him. I was one of them. I was there. I took his (expletive)," the texts continued.

Norwood then sent a photo of himself wearing "what appears to be a U.S. Capitol Police tactical vest underneath a zipped up camouflage jacket," court documents stated.

He then continued to claim that he fought four police officers who "did nothing" while he posed as a member of ANTIFA. However, Norwood claimed that when he put on his "red hat" the officers then allegedly "pepper balled" him.

Norwood even claimed he got a "nice helmet and body armor" off one of the officers.

One of Norwood’s brothers attempted to reprimand him, to which Norwood allegedly responded with, "The one cop who deserved it, got it," and "The cops who acted (expletive) got exactly what they deserved . . . The ones who were cool, got help."

Then, later that month, court documents say another family member alerted the FBI of the text messages. The FBI contacted Norwood to be interviewed on Jan. 26.

RELATED: More than 300 people have been charged after deadly US Capitol riot, Justice Dept. says

During the interview, Norwood told agents that he was at the Capitol on Jan. 6 with his wife to attend a Trump rally. Norwood made his way closer to the Capitol Building where he was "close enough to law enforcement to be sprayed in the face with a chemical irritant," court documents stated.

Norwood then told agents that he managed to make his way into the Capitol Rotunda, where he claimed two officers were waving for people to come inside.

The FBI was able to later confirm Norwood’s presence in the rotunda after reviewing surveillance footage from inside the Capitol Building on Feb. 25. 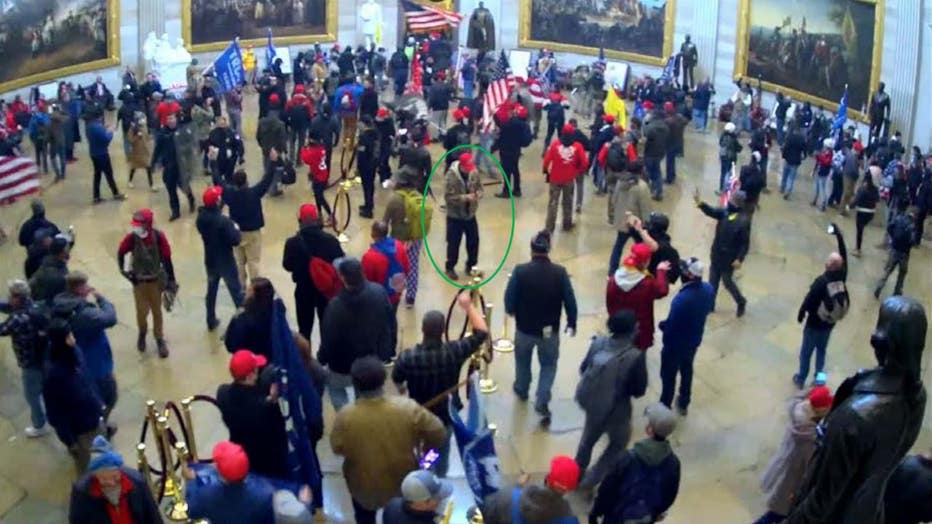 Surveillance footage obtained by the FBI pointing out Norwood.

RELATED: General testifies about 3-hour delay in getting National Guard to Capitol during riot

Court documents say Norwood also claimed in the interview that one of the officers who was allegedly waving for people to come inside the building told Norwood, "I’m on your side."

Norwood told agents he attempted to leave the Capitol but was unable to due to the massive amounts of people who had made their way inside at that point.

As the crowd became rowdy, Norwood told agents that he allegedly "helped protect multiple officers from being assaulted, including by forming a human chain to protect certain officers."

When he was finally able to make it out of the building, Norwood claims that an unknown person took a police vest that was sitting in a pile on the ground near the Capitol Building and allegedly put the equipment on Norwood. 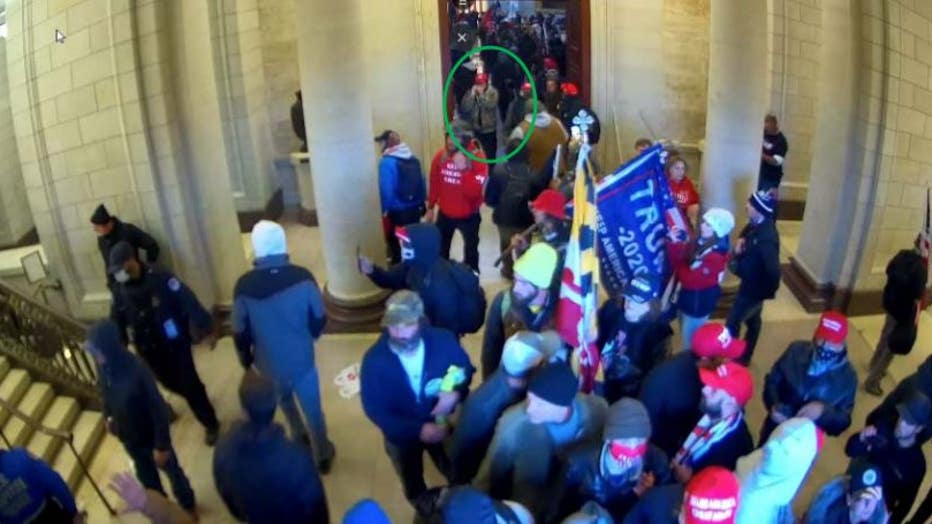 Surveillance footage obtained by FBI of Norwood inside the Capitol Building.

He then allegedly proceeded to "put on a police helmet from the pile of equipment before walking away from the Capitol and reuniting with his wife," court documents stated.

Norwood claimed that he and his wife then went to stay with some friends at a nearby hotel where he left the police gear. However, agents stated Norwood could not give details about the hotel he stayed at other than that it was a Hampton Inn.

Upon further investigation, agents confirmed through cellphone records that Norwood was in Washington, D.C. on Jan. 6 and were able to obtain more photos from Norwood of himself on the day of the riot, according to court documents.

Agents who worked on the case say there is enough evidence against Norwood to arrest him for illegal trespassing, attempted to stop the Electoral College count as well as conspiring to harm Capitol police officers.

Thousands of supporters of then-President Donald Trump stormed the U.S. Capitol Jan. 6 as Congress was voting to certify Joe Biden’s electoral win. So far, about 300 people have been charged with federal crimes for their roles in the riot. Five people, including a Capitol Police officer, died.

Since his defeat, Trump has promoted lies that the election was stolen from him through mass voter fraud, even though such claims have been rejected by judges, Republican state officials and Trump’s own administration. He was impeached by the House after the Jan. 6 riot on a charge of incitement of insurrection but was acquitted by the Senate.