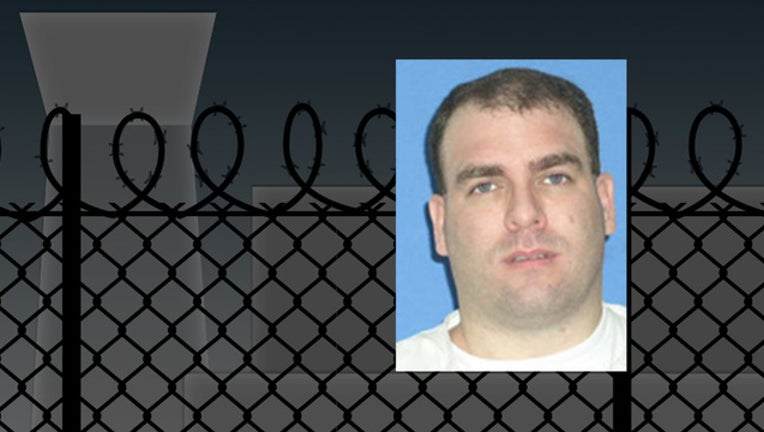 HUNTSVILLE, Texas (AP) - A Texas death row inmate who has always maintained his innocence and contends his conviction was based on junk science is set to be executed for the abduction, rape and murder of a suburban Houston college student more than 20 years ago.

Larry Swearingen, 48, is scheduled to receive a lethal injection Wednesday evening for the December 1998 killing of Melissa Trotter. The 19-year-old was last seen leaving her community college in Conroe, and her body was found nearly a month later in a forest near Huntsville, about 70 miles (110 kilometers) north of Houston.

Prosecutors said they stand behind the "mountain of evidence" used to convict Swearingen in 2000. They described him as a sociopath with a criminal history of violence against women and said he tried to get a fellow death row inmate to take credit for his crime.

Swearingen's attorneys late Tuesday asked the U.S. Supreme Court to halt the execution. They allege prosecutors used "false and misleading testimony" related to blood evidence and a piece of pantyhose used to strangle Trotter. Swearingen, who is also represented by the Innocence Project, has previously received five stays of execution.

The 5th U.S. Circuit Court of Appeals last week rejected a challenge to the testimony, saying it would not have many any difference in the trial due to the "mountain of inculpatory evidence" against Swearingen.

The 5th Circuit "failed to take into account the considerable amount of evidence of innocence in the record that has been developed over the years," said James Rytting, Swearingen's longtime appellate attorney.

If the execution happens, Swearingen would be the 12th inmate put to death this year in the U.S. and the fourth in Texas.

Kelly Blackburn, the trial bureau chief for the Montgomery County District Attorney's Office, which prosecuted Swearingen, said Swearingen's efforts to discredit the evidence have been unsuccessful because "his experts' opinions don't hold water."

"I have absolutely zero doubt that anybody but Larry Swearingen killed ... Melissa Trotter," Blackburn said.

During a 2011 interview, Swearingen told The Associated Press that he was tired of being "demonized" for a crime he didn't commit.

Blackburn said Swearingen killed Trotter because he was angry that she had stood him up for a date. At the time of Trotter's killing, Swearingen was under indictment for kidnapping a former fiancée.

"Hopefully we are one step closer to giving (Trotter's family) that justice that they've so long waited for," Blackburn said.

Swearingen has long tried to cast doubt on the evidence used to convict him, particularly claims by prosecution experts that Trotter's body had been in the woods for 25 days. Rytting said at least five defense experts concluded that her body was there for no more than 14 days, and because Swearingen had already been arrested by then on outstanding traffic warrants, he couldn't have left her body there.

In Tuesday's appeal to the Supreme Court, Swearingen's attorneys maintained that a piece of pantyhose used to strangle Trotter was not a match to a piece found in Swearingen's trailer and testimony by a crime lab technician stating it was a match is "misleading, invalid." They also dispute prosecution experts' claims dismissing blood found in Trotter's fingernail shavings, saying the blood, which was determined to not be Swearingen's, supports the defense theory that someone else killed her.

In letters sent to Swearingen's attorneys in July and August, the Texas Department of Public Safety said its technicians should not have been as definitive in their testimony about the blood found in the fingernails and the pantyhose match. The 5th Circuit disagreed with defense allegations that the testimony about the blood evidence and pantyhose match was false and misleading.

Blackburn said Swearingen has tried to get people to lie in order to give him an alibi. After his arrest, Swearingen got another inmate to write a letter Swearingen composed in Spanish that professed to be from the real killer and had it sent to his attorney. In 2017, Swearingen and another death row inmate, Anthony Shore, concocted a plan to get Shore to take responsibility for Trotter's killing. Shore was executed last year.

Rytting said Swearingen is guilty of doing "some very stupid things," but prosecutors don't have proof he killed Trotter.