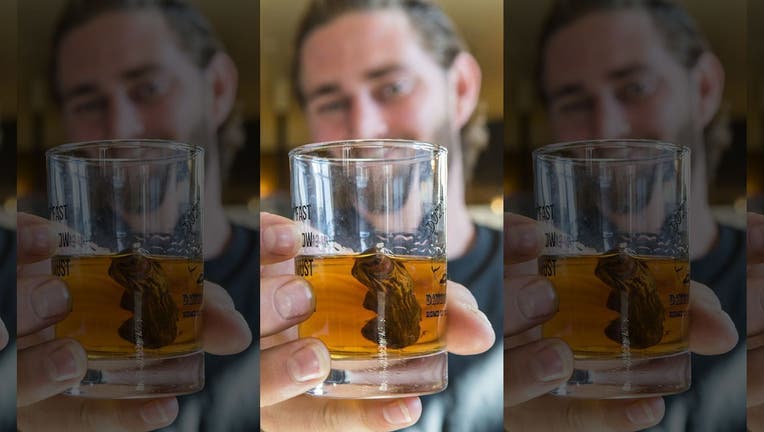 The hotel’s bar has actually been serving its Sourtoe Cocktail – basically just a shot of whiskey with a shrunken human toe in it – since 1973. (Downtown Hotel)

(FOX NEWS) - Hopefully, he won’t fidget when he drinks to his amputated digit.

One brave outdoorsman will finally take a special shot of whiskey at a bar in Canada’s Yukon Territory containing his amputated, now-dehydrated big toe, which he donated to the establishment for their signature “Sourtoe Cocktail” after losing it to frostbite in February 2018.

Nick Griffiths of Greater Manchester, England, lost three toes to frostbite while competing in the intense Yukon Arctic Race two winters ago. As he was being treated at a local hospital, the Royal Marines veteran remembered a strange advertisement he had seen just before the race.

“It said: ‘Had frostbite? We want your toes,’” Griffiths told The Guardian. “I thought it was a bit of a joke, really.”

But the ad was very real, as the Downtown Hotel is always on the lookout for frostbitten toes to garnish their creepy cocktail. The hotel’s bar has actually been serving up the drink – basically just a shot of whiskey with a shrunken human toe in it – since 1973.

And according to the bar’s rules, anyone who orders is tasked with touching the toe to their lips in order to join the “Sourtoe Cocktail Club.” Customers are told, “You can drink it fast, you can drink it slow, but your lips must touch the toe.” Over 90,000 brave souls have completed the challenge to earn a certificate of completion, the New York Post reports.

After corresponding with Terry “Toe Master” Lee, the man mailed in his three severed toes to the Downtown Hotel, where they have since been mummified and now await their former human owner for a ceremonious first toast, the Post reports.

“It takes six weeks to mummify a new toe on rock salt before it’s ready to serve,” Lee said. “We have been waiting for Nick to be first to do a shot with the new toe and make it extra special.”

According to the Post, the inn was in desperate need of a quality big toe as the “titular toe” of the $5 Sourtoe Cocktail is so sought-after that it frequently gets stolen.

“We have been without a big toe for some time, so his generous toe-nation will help ensure the tradition continues,” Downtown Hotel general manager Adam Gerle said in a news release.

On Monday night, Griffiths will be reunited with his lost digit for the first time since losing them in the ultramarathon. The Yukon tourism board will fly him out from Manchester to the hotel for the long-awaited drink. He will be the first person ever to drink the Sourtoe cocktail featuring his own detached big toe.

“I am excited to be returning to the Yukon and reuniting with my detached digit,” the man said, as per the Post. “Doing the Sourtoe Cocktail with my own big toe will be a memory I will take to the grave,” Griffiths says.

All are welcome to witness the sure-to-be legendary moment, the bar wrote in a Facebook event.