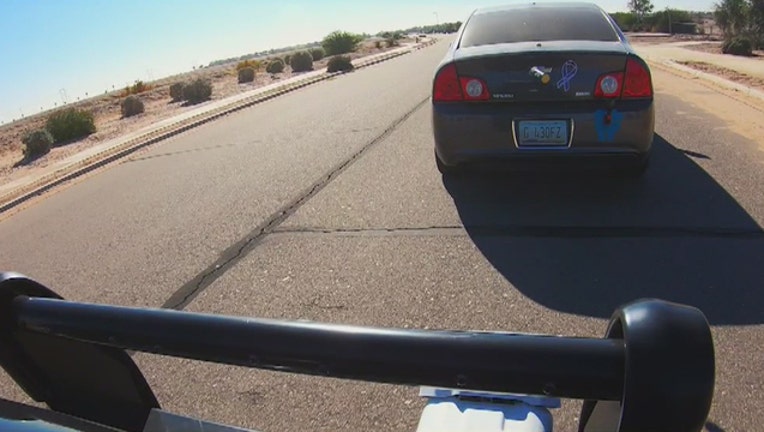 MARICOPA, Ariz. (FOX 10) -- With the push of a button, police officers in Maricopa can now chase suspects in high speed pursuits, without actually chasing them.

The system, named Starchase, allows officers to shoot GPS tracking devices onto fleeing cars, where it will stick. Instead of chasing down fleeing vehicles, the system allows police to physically get out of the chase, and still keep track of the criminals on the run. Maricopa Police is one of only two departments in Arizona using the technology, the other being DPS, and officials hope it will decrease the chances of a high-speed collision, during a pursuit.

"The GPS tracker allows us to follow safely, using Google Maps essentially," said Sgt. Sean Marchese with the Maricopa Police Department. "All you have to do is arm it, get ready, position yourself directly behind the vehicle, fire it, and get out of the situation itself."

The officer's car should be about 15 to 20 feet behind the suspect car for the projectile to successfully attach. It allows police to follow the vehicle's every move without air support. The device, however, isn't stealth. The fleeing driver can hear and feel it when it attaches, and there's the possibility of it being removed by the suspect.

Sgt. Marchese says Starchase researchers found that deploying the device results in half of the fleeing drivers pulling over right away. For those that keep going, the GPS tracker gives police information that could help them decide whether to use spike strips or use a different strategy altogether, and alleviates some of the chances of high speed collisions.

Maricopa Police expects to train its officers on how to use the technology before it goes live in early 2019. The department bought four Starchase devices, each of them costing $25,000.