Dallas police said a Duncanville woman's roommate murdered her and dumped her body in Dallas.

DALLAS - Dallas police said a Duncanville woman's roommate murdered her and dumped her body in Dallas.

According to police, surveillance pictures captured at the scene where Juanita Rodriguez was found showed a man who looked very much like Clinton Jones, and police said Jones admitted he was there.

Rodriguez’s family said they were blindsided by her death and the arrest of her roommate.

They said the suspect, Jones, acted calm all week, even helping search for Rodriguez.

Friday morning, Jones was charged with murder, and he now sits at the Dallas County jail.

"It’s sad. You have that mind that she was going to be alive, and then they gave me the news," Rodriguez’s sister, Lucia Martinez, said.

Martinez had been holding onto hope her older sister would be found safe, but Friday, her worst nightmare had an unexpected twist.

"It’s the person you never think is going to do that to you," she said.

Martinez said her sister and Jones were roommates for the past two years, and friends for at least 20 years.

In a wooded area in West Dallas, a memorial now stands where police said Jones dumped her body on Saturday, April 16.

"You had a plan how to do what you did. and his plan wasn’t that perfect," Martinez said.

Rodriguez, who was a custodian at Uplift Heights Secondary, also didn’t show up to work Monday morning.

While Martinez was driving to Dallas from McAllen, Jones filed a missing persons report with Duncanville PD.

According to an arrest affidavit, Jones told police he and Rodriguez previously were in a dating relationship.

"He always acts like my mama [is his mom]. He calls her, mama. ‘Tell mama I love her,’" Martinez said of Jones. "You took mama’s daughter away from here." 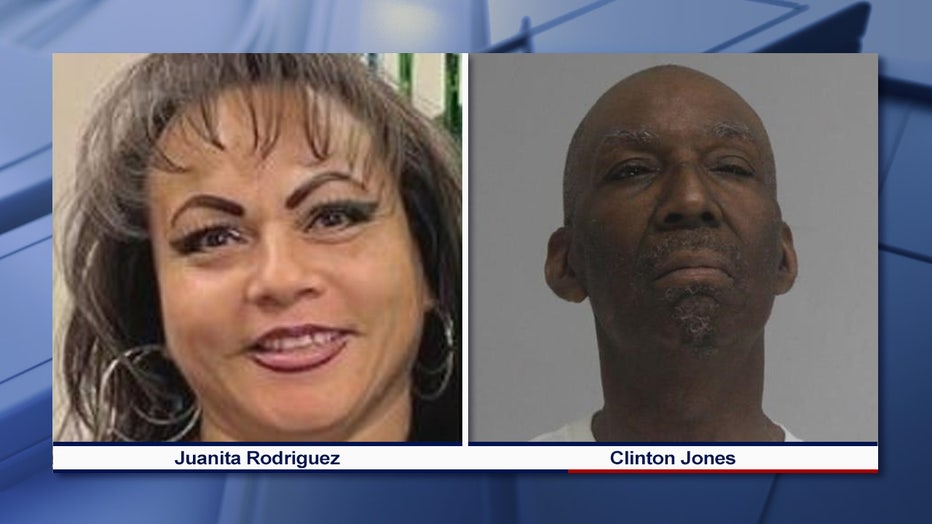 Wednesday, Rodriguez’s body was found off South Ledbetter Drive, wrapped in a tarp and duct tape, with a gunshot wound to the head.

Investigators said the video also revealed another person was seen in the passenger seat, but they didn’t get out.

Martinez was also there. She said she became suspicious when Jones became defensive.

"It was an act!" Martinez said.

According to police, Jones "made a statement about a gun in his room that had been moved and was not normally in the position he left it."

At DPD headquarters, police said Jones admitted he was at the crime scene, but couldn't explain why.

Back at Jones’ home, police found clothes matching the person in the photo at the crime scene, including the same overalls, gloves, a 22-revolver pistol and cleaning products.

It’s still unclear who was also with Jones at the scene, or if police are searching for that person.