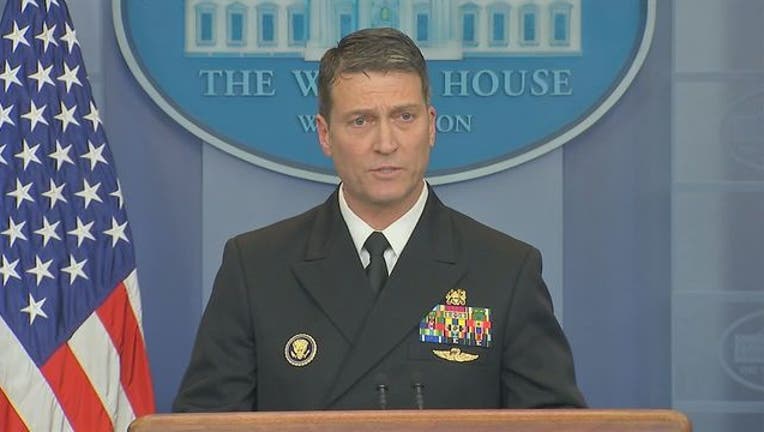 WASHINGTON (AP) — White House doctor Ronny Jackson exhibited a pattern of recklessly prescribing drugs and drunken behavior, including crashing a government vehicle while intoxicated and doling out such a large supply of a prescription opioid that staffers panicked because they thought the drugs were missing, according to accusations compiled by Democratic staff on the committee considering his nomination as Veterans Affairs secretary.

The summary was based on conversations with 23 of Jackson's current and former colleagues at the White House Medical Unit. It is the latest blow to his nomination to lead the government's second-largest Cabinet agency.

In just a matter of days, the allegations have transformed Jackson's reputation as a celebrated doctor attending the president to an embattled nominee accused of drinking on the job and over-prescribing drugs. He was seen pacing back and forth on the White House grounds Wednesday.

And while the White House put on a full-scale defense of Jackson, spokesman Raj Shah said aides are "of course" preparing for the possibility that he might withdraw. "This is, as the president said, Dr. Jackson's decision," Shah said on CNN.

A former colleague who spoke to The Associated Press described Jackson as a gregarious, Type A charmer who knew how to position himself for success — attentive to bosses but also causing unnecessary grief and consternation among colleagues.

He said Jackson became known as "Candyman" because of the way he handed out drugs. The ex-colleague spoke on condition of anonymity because of fear of retaliation.

The "Candyman" nickname was also cited in the summary released by the Democrats.

In a section on Jackson's prescribing practices, the summary said that in one case, missing Percocet tabs threw members of the White House Medical Unit into a panic — but it turned out he had prescribed a "large supply" of the opioid to a White House Military Office staffer.

The allegations also referred to multiple incidents of Jackson's intoxication while on duty, often on overseas trips. On at least one occasion he was nowhere to be found when his medical help was needed because "he was passed out drunk in his hotel room," according to the summary.

At a Secret Service going-away party, the summary says, Jackson got drunk and wrecked a government vehicle.

Jackson has denied allegations of bad behavior and told reporters at the White House he was "still moving ahead as planned."

"I never wrecked a car," he said. "I have no idea where that is coming from."

Reports of overprescribing and alcohol-related behavior problems can jeopardize a doctor's license. Many state medical boards allow doctors to keep their licenses and return to practice if they complete special treatment programs and submit to random urine screens.

"He has received more vetting than most nominees," she said.

Marc Short, the White House legislative director, could not say he was confident the allegations were false. He was "not familiar" with car wreck episode.

But Short also suggested Tester was airing the allegations for political gain.

"It's quite unusual for a United States senator to take allegations that have not been fully investigated, but to flaunt them to the national public to suggest he's the 'candyman' I think is outrageous," Short said.

Tester, speaking on MSNBC, acknowledged that not all the allegations had been verified.

Jackson met late at the Capitol with a key Republican on the Veterans Affairs Committee, Sen. Thom Tillis of North Carolina. They discussed a variety of subjects — "some were the allegations" — as well as Jackson's credentials for the job.

"It was just getting through the facts," Tillis said.

Veterans groups are dismayed over the continuing uncertainty at the VA, already beset by infighting over improvements to veterans care.

A watchdog report requested in 2012 and reviewed by the AP found that Jackson and a rival physician exhibited "unprofessional behaviors" as they engaged in a power struggle over the White House medical unit.

That report by the Navy's Medical Inspector General found a lack of trust in the leadership and low morale among staff members, who described the working environment as "being caught between parents going through a bitter divorce."

It included no references to improper prescribing of drugs or the use of alcohol, as alleged in the summary compiled by the Senate Democratic staff members.

The White House has released handwritten reports from Trump and former President Barack Obama praising Jackson's leadership and medical care and recommending him for promotion.

Trump's first VA secretary, David Shulkin, was dismissed after an ethics scandal and mounting rebellion within the agency. But Jackson has faced numerous questions from lawmakers and veterans groups about whether he has the experience to manage the department of 360,000 employees serving 9 million veterans.