The Webb team completed testing all of the telescope’s optical elements in a stage known as "fine phasing" on March 11, according to a NASA news release.

During fine phasing, the Webb telescope focused on a bright star during an alignment evaluation but the cameras on the telescope are so sensitive, it was able to also capture the galaxies and other stars seen in the background.

The subsequent image appears a tad orange/red because the telescope implemented a filter to optimize visual contrast, according to NASA.

Astronomers were happy to report that "every optical parameter that has been checked and tested is performing at, or above, expectations." 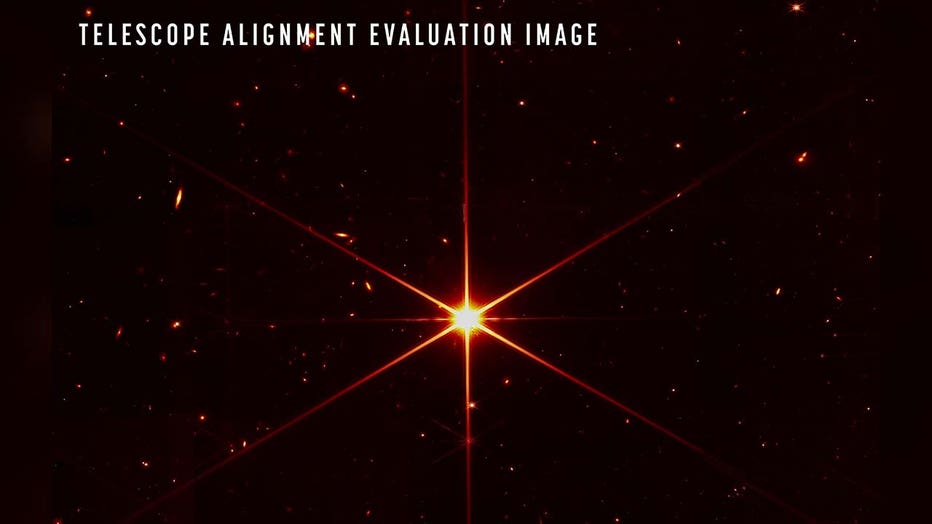 While the purpose of this image was to focus on the bright star at the center for alignment evaluation, Webb's optics and NIRCam are so sensitive that the galaxies and stars seen in the background show up. At this stage of Webb’s mirror alignment, kn

"The team also found no critical issues and no measurable contamination or blockages to Webb’s optical path. The observatory is able to successfully gather light from distant objects and deliver it to its instruments without issue," NASA said.

The Webb telescope still has a few more months of testing to go before it can start sending back views of the cosmos to scientists back on Earth. This latest achievement and consequent image reassure the Webb team that the telescope's optics are working as well as possible.

"We have fully aligned and focused the telescope on a star, and the performance is beating specifications. We are excited about what this means for science," said Ritva Keski-Kuha, deputy optical telescope element manager for Webb at NASA Goddard. "We now know we have built the right telescope."

The Webb team is on track to conclude all aspects of Optical Telescope Element alignment by early May, according to NASA, and hopes the Webb’s first full-resolution imagery and science data will be released in the summer.

At 1 million miles (1.6 million kilometers) away, Webb is more than four times as distant as the moon. It is the world’s biggest, most powerful space telescope and is considered the successor to the Hubble Space Telescope.

The Webb is expected to operate for well over a decade, maybe two.