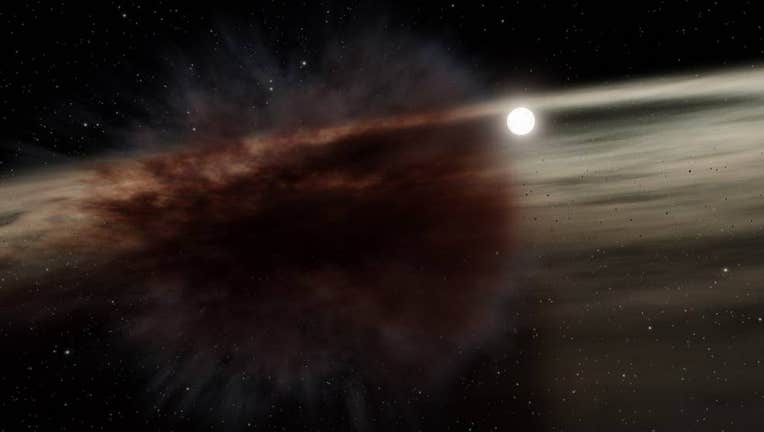 This illustration depicts the result of a collision between two large asteroid-sized bodies: a massive debris cloud around a young star. NASA’s Spitzer saw a debris cloud block the star HD 166191, giving scientists details about the smashup that occu

NASA has shared an image depicting what researchers say is the first observation of a debris cloud from a massive celestial collision.

In a study published earlier this month in the Astrophysical Journal, a group of astronomers led by the University of Arizona reported when the debris cloud passed in front of its star and briefly blocked the light, also called a transit.

While astronomers using NASA's retired Spitzer Space Telescope have previously found evidence of these types of collisions around young stars where rocky planets are forming, those observations did not provide many details about the events.

"There is no substitute for being an eyewitness to an event," co-author George Rieke said in a statement. "All the cases reported previously from Spitzer have been unresolved, with only theoretical hypotheses about what the actual event and debris cloud might have looked like."

The authors began making routing observations of a 10 million-year-old star called HD 166191 in 2015.

NASA said that the team used the Spitzer telescope to conduct more than 100 observations of the system over the course of the next four years.

At around that time in the star's life, dust left over from its formation has combined to create planetesimals.

As the gas that previously filled the space is dispersed, catastrophic collisions between them are frequent.

These collisions produce large amounts of dust and the telescope detected infrared light, which is ideal for detecting that dust.

In 2018, the telescope saw the star system become brighter, which the agency said suggested an increase in its production of debris.

Additionally, the telescope found a debris cloud blocking the star.

The researchers found that the cloud was highly elongated, with its estimated area a minimum of three times that of the star.

The telescope suggested the debris stretched to hundreds of times larger than HD 166191.

To produce such a cloud, NASA said the colliding objects must have been the size of dwarf planets.

By 2019, the cloud was no longer visible, but the star system contained twice as much dust as before.

"By looking at dusty debris disks around young stars, we can essentially look back in time and see the processes that may have shaped our own solar system," lead researcher Kate Su said. "Learning about the outcome of collisions in these systems, we may also get a better idea of how frequently rocky planets form around other stars."