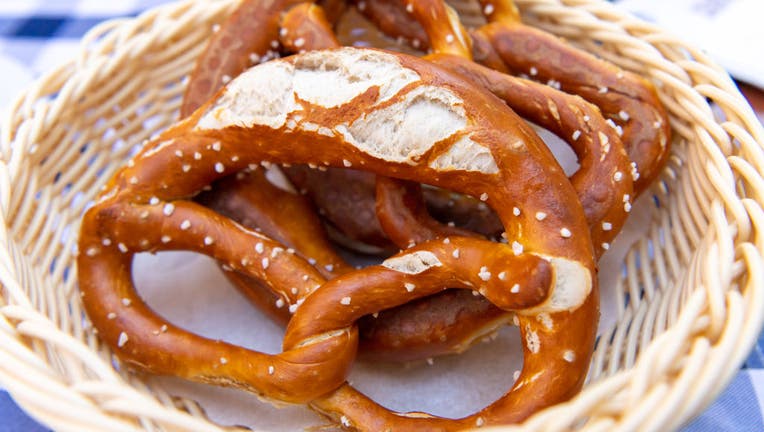 April 26 is National Pretzel Day, a time to honor and enjoy one of America’s favorite, twisted snacks.

Whether you prefer a large, soft pretzel or a bag of smaller, crunchy snacks — any way you eat a pretzel is sure to hit the spot.

The pretzel’s origin has been tied to certain Christian faiths, including the Catholic Church, which dictated stricter rules on fasting and abstinence during Lent in the seventh century, according to History.com.

At one point, all types of meat, dairy and eggs were prohibited during the 40 days of Lent. Pretzels, which are made of water, flour and salt, became an ideal food to eat during this period.

The first pretzels were baked as soft, squishy bread, similar to the soft pretzels made today, History.com says. Some have said the food was originally called "bracellae," the Latin term for "little arms," from which Germans later derived the word "bretzel."

Early pretzels were also called "pretiolas," meaning "little rewards," and handed out by the monks when their young pupils recited their prayers correctly, according to History.com.

Regardless, the twisty treats soon spread across Europe during the Middle Ages. By the 17th century, the interlocking loops of the pretzel had come to symbolize undying love.

"Pretzel legend has it that in 1614 in Switzerland, royal couples used a pretzel in their wedding ceremonies (similar to how a wishbone might be used today) to seal the bond of matrimony, and that this custom may have been the origin of the phrase ‘tying the knot,’" History.com said.

Today, pretzels remain a beloved treat around the world, even earning a special day celebrated by employees on NBC’s "The Office."

In the U.S., Pennsylvania has become the American pretzel-making capital with companies like Snyder’s of Hanover, and 80% of all pretzels sold in the U.S. are made in the state.

In celebration of the day, here are some restaurant chains offering freebies and deals on pretzels:

Auntie Anne’s is giving a free Original or Cinnamon Sugar pretzel to its Pretzel Perks members all day long on April 26. The offer is limited to one per person.

Ben's Soft Pretzels, with more than 140 locations across the U.S., is offering a free pretzel to anyone who donates $1 to the Tunnel to Towers Foundation, an organization that provides mortgage-free homes and other assistance to Gold Star and fallen first responder families.

Philly Pretzel Factory, a soft pretzel franchise with over 170 stores across 19 states, is offering one free pretzel or twist at any location on April 26. No purchase is required.

Wetzel's Pretzels is giving away a free original pretzel on April 26 between 3 p.m. local time and close at its locations nationwide.