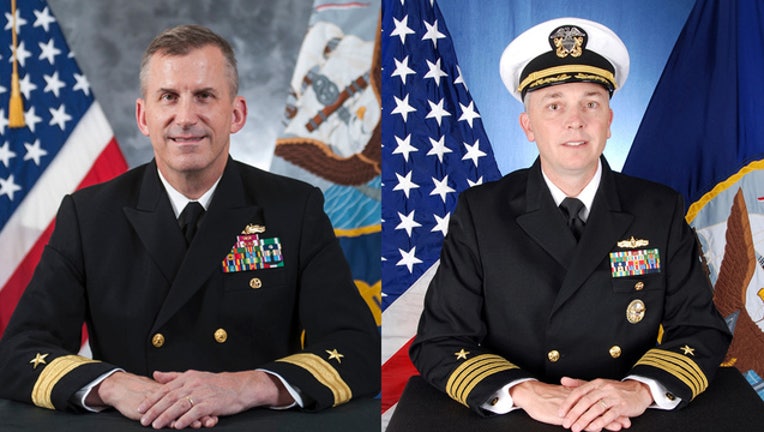 WASHINGTON (AP) — The U.S. Navy has fired two senior commanders in the Pacific region in connection with recent deadly collisions of Navy ships, as part of a sweeping purge of leadership in the Japan-based fleet.

The announcement comes a day before the top U.S. Navy officer and the Navy secretary are scheduled to go to Capitol Hill for a hearing on the ship crashes.

Vice Adm. Phil Sawyer, commander of the Navy's Japan-based 7th Fleet, fired Rear Adm. Charles Williams and Capt. Jeffrey Bennett, citing a loss of confidence in their ability to command. Williams was the commander of Task Force 70, which includes the aircraft carriers, destroyers and cruisers in the 7th Fleet, and Bennett was commander of the destroyer squadron.

The USS John S. McCain and an oil tanker collided in Southeast Asia last month, leaving 10 U.S. sailors dead and five injured. And seven sailors died in June when the USS Fitzgerald and a container ship collided in waters off Japan.

The latest dismissals bring the number of fired senior commanders to six, including the top three officers of the Fitzgerald.

Navy Capt. Charlie Brown said Monday that 7th Fleet ships have completed the one-day operational pause ordered for the entire Navy to make sure crews were conducting safe operations. And Pacific Fleet is in the process of carrying out a ship-by-ship review of its vessels, looking at navigation, mechanical systems, bridge resource management and training.

Rear Adm. Marc Dalton is now commander Task Force 70, and Capt. Jonathan Duffy, who was deputy commander of the destroyer squadron, took over as commander.