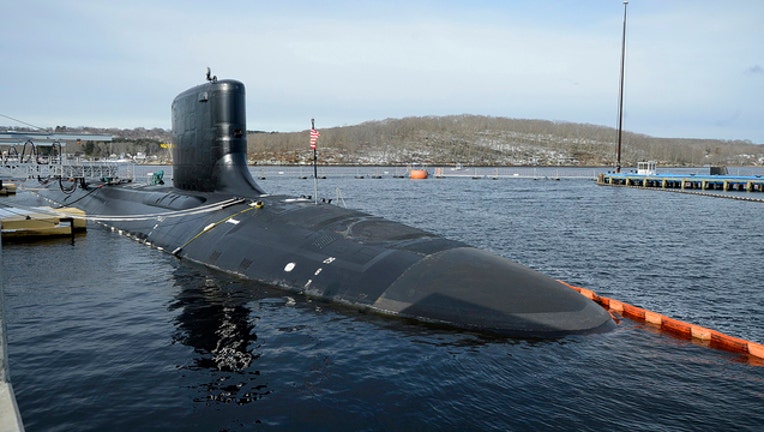 PROVIDENCE, R.I. (AP) - The U.S. Navy's newest attack submarine, the USS Colorado, will go into service Saturday at the Naval Submarine Base in Connecticut.

Cmdr. Reed Koepp, the Colorado's commanding officer, says it's an exciting time for the crew, shipbuilders, the local community in Connecticut and the state of Colorado. The submarine is "ready to protect the homeland and project our power forward," he added.

"We're really looking forward to this Saturday when we can introduce the Colorado as an official naval asset," Koepp said.

The 377-foot-long sub weighs about 7,800 tons submerged. It can fight submarines and surface ships, conduct surveillance and deliver Special Operations troops. It has two large tubes that can launch six Tomahawk missiles each.

The Colorado is the first attack submarine where sailors use an Xbox controller to maneuver the photonics masts, which replaced periscopes, Koepp said. Other submarines have joysticks. Using commercial off-the-shelf technology saves money, and young sailors report to the submarine knowing how to use it, Koepp said.

Koepp leads 130 men, including crew members from Brighton, Denver and Littleton, Colorado. Women serve on submarines but they haven't been assigned to the Colorado. One-fifth of submarine crews are integrated.

It took submarine supply businesses nationwide and thousands of shipyard employees in Connecticut, Rhode Island and Virginia to build the Colorado, the 15th member of the Virginia class of submarines.

Attack submarines are built in a partnership between General Dynamics Electric Boat in Connecticut and Newport News Shipbuilding in Virginia. They cost about $2.7 billion apiece.

"Compared to prior generations of submarines, Colorado is bigger, faster and overall much more capable, and should serve as a compelling deterrent to our adversaries," said U.S. Rep. Joe Courtney, a Connecticut Democrat who will welcome the audience at Saturday's ceremony.

U.S. Sen. Cory Gardner, a Colorado Republican, will give the keynote address. He plans to talk about the work the submarine's crew will carry out and how proud he is of the state of Colorado's role in the nation's defense.

"This commissioning will be a special day for our country and for Colorado," he said in a statement.

Annie Mabus, the daughter of former Navy Secretary Ray Mabus, will give the order to bring the ship to life before the crew boards the vessel.

More than 2,000 Navy officials, politicians, shipbuilders, local community leaders and guests of the crew are expected at the ceremony. It will be livestreamed online. The submarine will remain in Groton after the commissioning.

It's the fourth U.S. Navy ship named Colorado. The first Colorado, launched in 1856, saw action in the Civil War. The second escorted convoys of men and supplies to England during World War I and the third supported operations in the Pacific during WWII, surviving two kamikaze attacks and earning seven battle stars, according to the Naval History and Heritage Command.

AP Writer Dan Elliott in Denver contributed to this report.