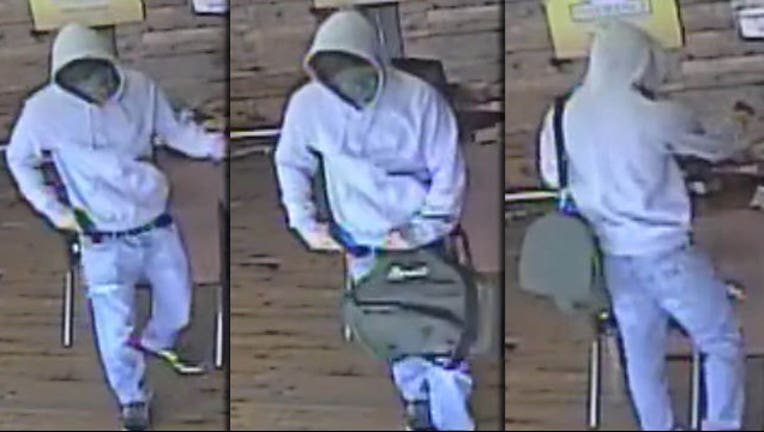 NEW BRAUNFELS, Texas - Police say the robbery happened on April 20 at around 2:30 p.m. A man entered the Freeway Insurance Services office in the 800 block of South Seguin Avenue near Nacogdoches Street. Police say the man brandished a black semi-automatic handgun, demanded cash from an employee and left with an unknown amount of money. Police say the man was last seen on foot heading in the direction of Comal Avenue.

The suspect is described as male, average height, wearing a gray hoodie, a blue bandana over his face, blue jeans (with a large tear in the right leg), a dark-colored belt, and skater-style shoes that are dark-colored in the front and lighter-colored in the back.

Comal County Crime Stoppers is offering a reward of up to $2000 for information that leads to an arrest and/or grand jury indictment. To remain anonymous and to collect the reward, contact Crime Stoppers at 830-620-TIPS (8477), leave a tip online, or text a tip by texting "Comal" plus your message to CRIMES (274637).

To contact the New Braunfels Police Department directly about the identity of this suspect, call Detective Greg Walker at 830-221-4145.