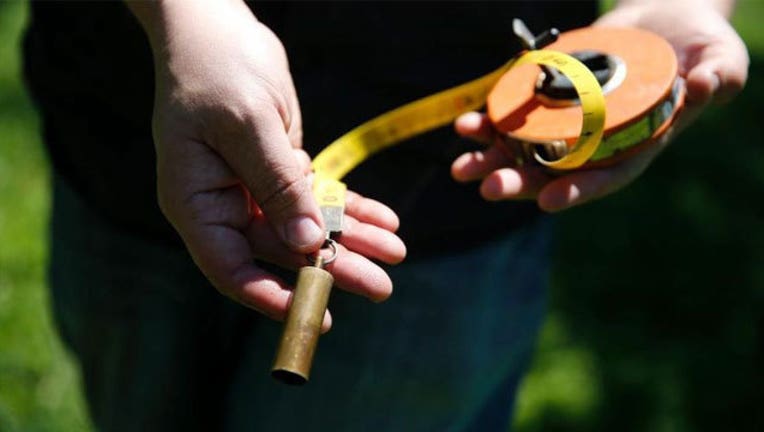 May 5, 2016: An architectual planner shows a probe to measure groundwater levels in the planned Mirabeau water garden in New Orleans (AP)

NEW ORLEANS (AP) — In a metamorphosis, New Orleans — once overwhelmed by failed levees and Hurricane Katrina's floodwaters — is moving to become a national model of how an urban center can embrace green tactics to tame water.

The city is recalibrating its century-old system of drainage canals and massive pumps by installing green infrastructure projects, potentially on an unprecedented scale for an American city.

"Our success and our potential demise are all tied up in whether or not we learn to handle water," said Z Smith, an architect with firm Eskew+Dumez+Ripple championing the new water-management approach.

The federal government hopes to encourage the model across the nation in this era of climate change and intensifying storms, sea-level rise and increasing urbanization.

"They are trying to retrofit whole districts of the city with green infrastructure," said Harriet Tregoning, a principal deputy assistant secretary with the U.S. Department of Housing and Urban Development. "It is a model? Is it an experiment? Is it a place to learn from? All of the above."

The basic idea is to collect and trap much more of the 60-plus inches of rain that fall every year rather than pump it out of the city's levee system. The rain will go into large and small detention areas — in empty fields and parks, under streets and parking lots. In turn, the city will grow greener and more attractive, planners say.

The city hopes to avoid flooding by storing water that can't be pumped out fast enough. But a bigger and more complicated feat looms: Stop the ground from sinking.

Since the early 1900s, neighborhoods atop reclaimed swamp and marsh have been sinking, by as much as 10 feet in places.

"The bad news is that we cannot go back and replace what we lost," said Jeff Hebert, the city's chief resilience officer. "We have to move that off the table. But if we don't do anything, it's going to be a lot worse."

Crucial to this experiment are 25 acres of wildflowers, ant hills and sprawling oaks in the Gentilly neighborhood, a predominantly black suburb developed atop drained swamp after World War II.

For about $12.4 million, this green space will become a series of detention ponds that could divert as much as 9 million gallons of water from the drainage system.

On a recent afternoon after a week of rain, Ramiro Diaz, architectural planner with Waggonner & Ball, crouched over a 10-foot-deep well measuring groundwater levels. They'd sprung up a bit thanks to the rain.

"Look at those houses over there," Diaz said pointing at nearby homes tilted from gradual sinking, called subsidence. "The soil here is so weak in this part of the city. When you take the groundwater out, you get subsidence."

The city is building smaller detention ponds called rain gardens on empty lots, too — seven so far with many more planned.

"These lots are designed to drain dry within 48 hours," said Brian Burns, a city project manager who oversees the gardens. "The reason being is mosquitoes like to breed in water that is no higher than 3 feet."

They are planted with native plants such as lilies, cypress and oaks, which suck up lots of water, he said.

"When you have a disaster like Katrina, or something like Houston just experienced, you really start to take an aggressive approach to dealing and managing storm water," Burns said.

Houston, with no zoning laws and untrammeled development, saw calamitous flooding in April that killed eight and inflicted tens of millions of dollars in damage.

There are critics — though few.

"All of these are schemes to deal with the geology and hydrology of a city that is not sustainable," said Ed Richards, a Louisiana State University law professor who studies the state's efforts to deal with sea-level rise, coastal land loss and gradual sinking.

The urban water plan is viewed as one line of defense in a strategy that calls for action on multiple fronts — from flood protection to rebuilding Louisiana's fragile coast in an effort to make sure the next powerful hurricane doesn't doom the region.

The city's new fondness for water is striking because 10 years ago all anyone in New Orleans seemed to think about was getting rid of it. Back then, and for years afterward, efforts were concentrated on building bigger levees, floodwalls, pumps and gates to keep hurricane waves out of the city.

"It does seem ironic that we are now trying to embrace water," said John Lopez, a coastal scientist with the Lake Pontchartrain Basin Foundation. "We need to do things inside the levees. Don't take that extrapolation too far. We still have to battle to keep the water out of the city."