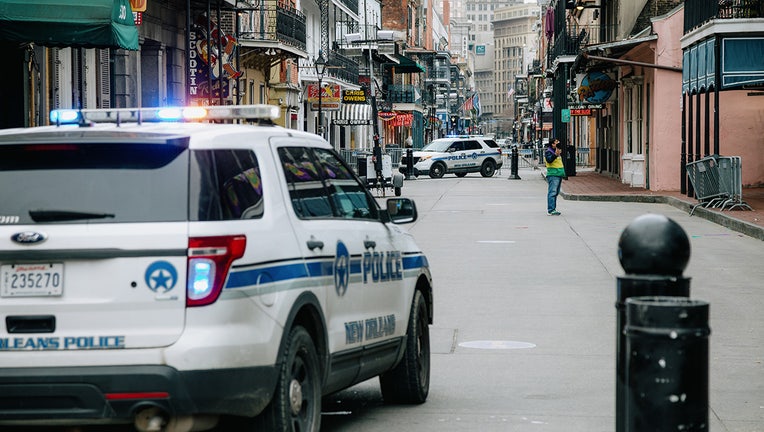 Police vehicles block access to Bourbon Street in New Orleans, Louisiana, U.S., on Tuesday, Feb. 16, 2021. Since 1857, Mardi Gras celebrations in New Orleans have been called off only 14 times, because of war, mob violence, or labor disputes. Not eve

NEW ORLEANS - A man in the New Orleans area, where truck break-ins have surged exponentially in the last year, took matters into his own hands by installing a flash bang inside the vehicle to punish criminals.

He had a chance to see his creation at work Friday night, when a thief smashed the window of his truck and triggered the loud, non-lethal deterrent he had set up in the center console. It was all caught on surveillance video.

"To see him like gleefully walk up and just smash my eighth window in the past couple months and jump in, and then you know to see the detonation go off and his reaction," the man, who wished to remain anonymous, told FOX 8 New Orleans.

"I don’t want this guy to die for what he did, but I don’t want him to just be able to smash and grab and run away," he added.

"He probably didn’t get hurt that bad, but it wasn’t pleasant, and it might deter him and his friends and tell other people not to do this too because, without something like this, there is no consequence because they’re not going to get arrested," the truck owner said.

New Orleans police data shows vehicle burglaries in the city are up 28% compared to last year. In the Central Business District, where the man lives, they are up 116%, according to FOX 8.

"Leadership has failed in more ways than one when it comes to this situation, just crime in the area, like, I reported to the police almost every time and I don’t blame the police for this, they’re understaffed and like there’s too much crime. I really blame the fact that like these, these people get caught, and then they basically get bailed out," he said. "Whoever did this, definitely, had a bad night. He might never do it again because every time he goes in there, this could happen to him."

A tornado tore through a part of New Orleans Tuesday evening, leaving at least one dead and a trail of damage in its wake.

The truck owner's condo is for sale because he says his truck continues being targeted. He believes the thieves are after weapons left in vehicles, because valuables left in past break-ins affecting him have gone untouched.

"While we understand the frustrations our citizens have with crime, rigging an explosive device to detonate inside a vehicle is illegal and a bad idea," the department said to WDSU. The department did not immediately to a request from Fox News Digital.

"Not only is there a risk of injury to yourself and others, there could be serious legal ramifications for everyone involved," the department said. "Please call your District station or CrimeStoppers to report illegal activity."

Find the latest on this story on FOXNews.com.