Emily Moncus of South Carolina said she was brainstorming Halloween themes for her photography business when suddenly a commercial for for a horror film struck her with an idea.

SPARTANBURG, S.C. - A South Carolina photographer looking to get into the Halloween spirit created an “It”-inspired photo shoot featuring a newborn transformed into Pennywise from the famous horror franchise.

Emily Moncus, who specializes in maternity, newborn and toddler photography, said she was brainstorming Halloween ideas for her photography business when suddenly a commercial for “It Chapter Two” appeared on television and she became struck with the idea.

She recruited a prop specialist for newborn photo shoots, called Pitter Pat Creations, to help bring her idea to life — including developing a special Pennywise set and outfit. 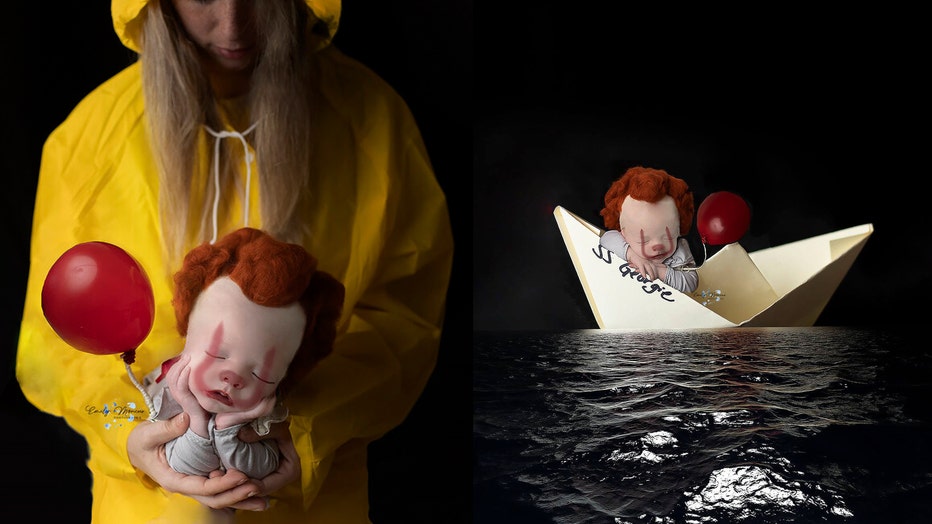 Maternity and newborn photographer Emily Moncus said she became struck with the idea of a Pennywise-themed photo shoot and had to see the idea come to life. (Photo credit: Emily Moncus Photography)

“Now, anyone who knows me knows, I do not watch horror films. In fact, they scare me to the core and I cannot sleep for weeks,” Moncus wrote in a blog post, adding that she recruited friends for help with “It” ideas.

Moncus said she decided to use Georgie and the SS Georgie from the Stephen King films as inspiration and purchased velvet fabric and a yellow raincoat on Amazon.

Moncus said she then had to find a willing participant. She put out a call in her local area in hopes of finding the “perfect match” for the Pennywise baby.

“I went through four different models that were not okay with the idea of Pennywise, and then as luck would have it, I found a model whose mother loves all things Stephen King,” Moncus explained.

The newborn and his Stephen King-loving mother were the final piece to her creative puzzle, Moncus said.

After capturing images with her tiny model, Moncus went to work in post-production by adding makeup and reshaping the baby’s head a bit to resemble Pennywise.

One of the final images from the shoot show the Pennywise baby sitting in an SS Georgie paper boat on the water. Another shows a woman dressed in a yellow raincoat and holding the tiny Pennywise and a red balloon.

“It was fate to find a client that was as excited about the session as me,” Moncus added.

Based on Stephen King’s 1986 novel of the same name, “It” was developed into a two-part miniseries in 1990 and later released as a 2017 adaptation, followed by the second installment, “It Chapter Two,” in 2019.