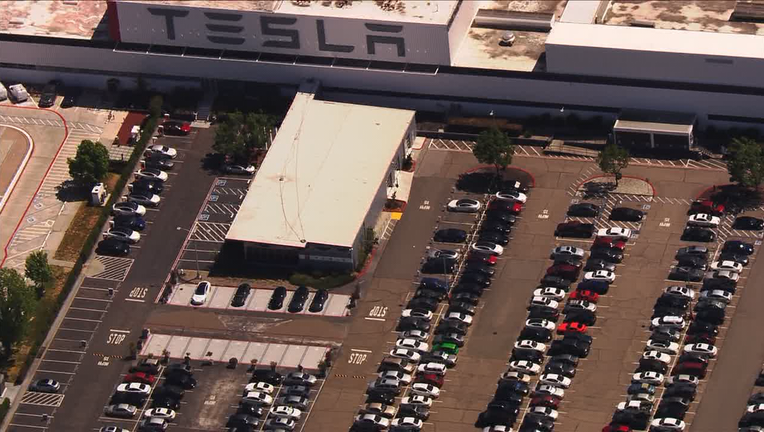 SACRAMENTO, Calif. - Gov. Gavin Newsom said that the Tesla car plant in Fremont and other manufacturers might be able to resume operations as early as next week.

He made the comments on Monday during a question-and-answer period with reporters who asked about the escalating tensions between Tesla CEO Elon Musk and public officials in California.

Over the weekend, Musk threatened to relocate the company's headquarters and factory. He sued Alameda County over its shelter-in-place order because his company has not been allowed to legally operate. Musk claims to have a plan that would guarantee worker safety amid the coronavirus pandemic.

On Monday, the Tesla plant in Fremont appeared to be busy with employees although the county's shelter-in-place order forbids work outside minimum services, like payroll and inventory, at the plant. On Monday, SkyFox flew over the factory, showing a full parking lot.

After Newsom spoke, he tweeted "Tesla is restarting production today against Alameda County rules. I will be on the line with everyone else. If anyone is arrested, I ask that it only be me."

The Bay Area Council issued a press release this weekend urging the plant to reopen. The council noted that Alameda County health officials decided to keep the Fremont factory shut down came after the state of California moved to Stage 2 of its COVID-19 response, allowing businesses such as certain manufacturers to resume operations, provided that they adopt strict safety standards.

Alameda County and most of the Bay Area have chosen not to immediately jump into Stage 2 of the order.

Tesla has discussed its stringent safety initiatives in a Return-to-Work Playbook.

However, KTVU received a call from a Tesla employee who said he was at work from 6 p.m. Sunday until 6 a.m. Monday. He said Tesla is "up and running" and he feels like health guidelines aren’t being followed.

Newsom said that the county health department could take action if there was proof Tesla had violated any orders.

Asked about Musk's frustration with Alameda County's order, Newsom reiterated that the state allows manufacturing in its current phase. And he added that possibly as early as next week, Tesla can resume work. He did not elaborate.

In terms of Tesla's threat to leave California, Newsom said he's "confident we'll get through this."