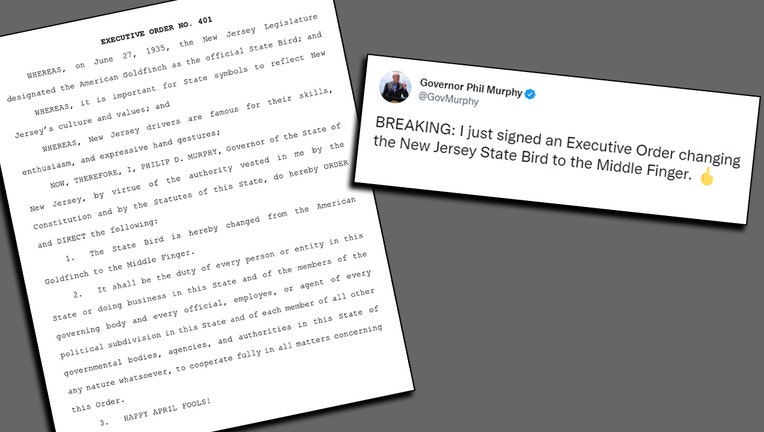 JERSEY CITY, N.J. - New Jersey Gov. Phil Murphy remains steadfastly hard at work despite testing positive for COVID-19 this week. Murphy announced on Friday that he has signed an executive order changing one of the state's symbols.

"I just signed an Executive Order changing the New Jersey State Bird to the Middle Finger," the governor posted on social media.

His post included a screenshot of the text of his executive order, written in typical governmentese — a.k.a. awkward legal language containing Unnecessary Capitalization.

"WHEREAS, it is important for State symbols to reflect New Jersey's culture and values; and WHEREAS, New Jersey drivers are famous for their skills, enthusiasm, and expressive hand gestures; … The State Bird is hereby changed from the American Goldfinch to the Middle Finger," Murphy's order stated.

The state's Motor Vehicle Commission — no stranger to New Jersey drivers and their hand gestures — replied in a tweet: "We see a lot of them."

The order also requires every person, entity, and official in the state and doing business with the state to acknowledge and cooperate with the change — indeed, it is everyone's duty to do so.

Murphy, however, didn't comment on the state Senate's resolution on the definitive way to refer to that processed meat product commonly found on patrons' plates at any of the state's numerous diners.

"After much debate, the Senate just announced that Taylor Ham is the official way to say New Jersey's favorite breakfast food, not Pork Roll," the Senate Democrats tweeted.

The governor did, however, conclude his executive order with Item No. 3: "HAPPY APRIL FOOLS!"