In the early morning hours of Sept. 29, someone drove through the T-shaped intersection where their property sits and into the front of their building.

AUSTIN, Texas - With fall underway, Tuesday was a mostly pleasant day for the students at Highland Montessori School to spend time outside. But it wasn’t just for playtime, and it wasn’t by choice.

"We are completely outside from 8 a.m. to 6 p.m.," said school director Lulu Solomon.

In the early morning hours of Sept. 29, someone drove through the T-shaped intersection where their property sits and into the front of their building. The front of the school has been boarded up for now, and the area where they used to work is currently unusable. 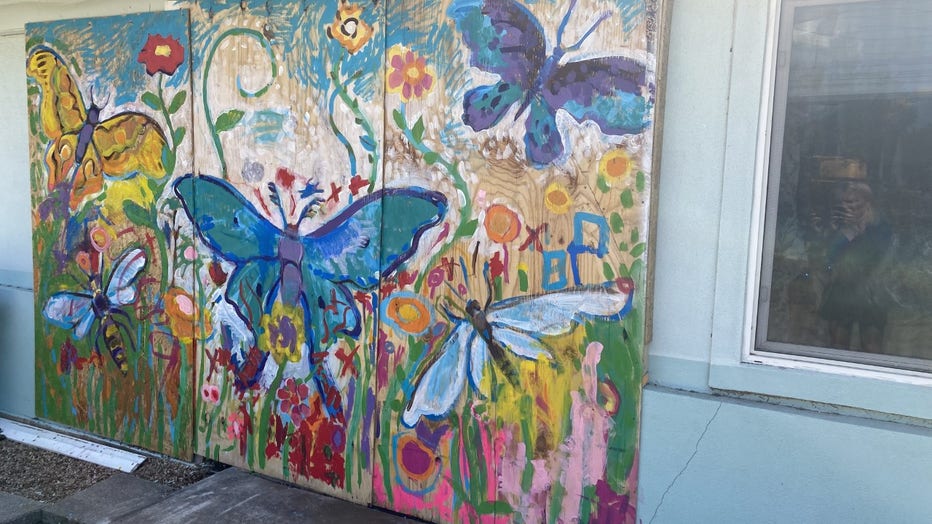 A painted board now covers the inside of the school. The art teacher started the painting and kids have been adding to it every day

"I really feel like it was a blur that morning to just come and find our business all broken and torn up," said Solomon. "I was totally disheartened it was like, ‘Oh my goodness, how are we going to, do we even have a school?’"

Solomon also expressed some frustration at how the situation was handled.

She said she and her husband, who run the school together, woke up to a voicemail from police giving them the case number and letting them know what happened.

"It’s kind of a little sad because our Montessori philosophy is about teaching peace. We teach children how to take care of each other, to be a community," she said. "To be left alone, to show up to our school with the wall open, guts to the street and nobody’s here to say, ‘Hey, we’re here for you, let’s help you out, I have a list of resources for you…’"

The driver involved in the crash ditched the car and ran off. They still have not been located.

Since the crash, Solomon and her husband have been trying to navigate the process of moving forward with repairs. They have insurance, but it’s unclear how long it will take to fix the damage.

Unfortunately, the crash didn't necessarily come as a surprise.

Solomon said she and parents have had close calls while walking where St. John’s Avenue meets Northcrest Blvd. The previous owner of the house-turned-school even put boulders in front of the property for protection.

During last week’s crash, the car drove through the boulders, splitting one of them in half.

In the early morning hours of Sept. 29, someone drove through the T-shaped intersection, where Highland Montessori School sits, and into the front of their building. (Rick Weller)

"I just empathize so much with traffic accidents all over the city," said Councilmember Vela. "But those dangerous intersections in District 4 my staff and I want to take particular responsibility for."

Councilmember Vela, along with representatives from the Austin Transportation Department and Public Works Department, stopped by the school Tuesday morning to hear concerns.

"The neighbors were reporting a high incidence of speeding on Northcrest there, and then, of course, St. John’s is kind of a little workaround between I-35 and 183, too," he said. "So there’s a lot of traffic flow through there."

Various safety measures were discussed, but under city traffic restrictions, installing any type of barrier would be the choice and responsibility of the property owner.

"But if that level of shielding and protection is necessary, then that tells me that the intersection is not properly designed," said Councilmember Vela. "And either we need to redesign that intersection or maybe, potentially, purchase the property and add it to the park that’s right there."

By Tuesday afternoon, Councilmember Vela was informed of changes underway by one of the city’s traffic engineers.

Work orders have been issued for a new "Signal Ahead" sign on Northcrest Blvd., and a current sign will be replaced.

A service request has been created for the Watershed Protection Department to clear the vegetation from the nearby creek, and the Public Works Department will coordinate the trimming of branches that may affect visibility of the traffic signal.

The city also plans to refresh the pavement markings at the intersection and install reflective pavement markers on the curb along St. John’s Ave. facing Northcrest Blvd.