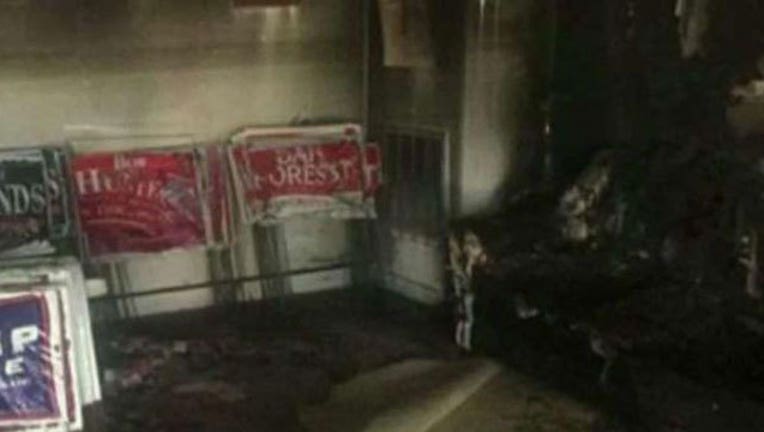 HILLSBOROUGH, N.C. (AP) — A local Republican Party office in North Carolina was damaged by fire and someone spray-painted an anti-GOP slogan referring to "Nazi Republicans" on a nearby wall, authorities said Sunday.

A news release from the town of Hillsborough said someone threw a bottle filled with flammable liquid through the window of the Orange County Republican Party headquarters overnight. The substance ignited and damaged furniture and the interior before burning out.

The news release says an adjacent building was spray-painted with the words: "Nazi Republicans leave town or else."

State GOP director Dallas Woodhouse said no one was injured, but a security alert is being sent to party offices around the state.

On Sunday afternoon, the walls of the multi-room office were covered in black char, and a couch against one wall had been burned down to its springs. Shattered glass covered the floor, and melted campaign yard signs showed warped lettering. The graffiti had been covered in paint by late afternoon.

Another business owner discovered the damage Sunday morning. Local police are investigating alongside the Bureau of Alcohol, Tobacco, Firearms and Explosives.

Woodhouse said that people sometimes work after-hours, and he felt lucky that no one was there at the time.

"They are working around the clock. It is a miracle that nobody was killed," he said in a phone interview.

Hillary Clinton, the Democratic nominee for president, tweeted, 'The attack on the Orange County HQ @NCGOP office is horrific and unacceptable. Very grateful that everyone is safe'.

Tom Stevens, the mayor of the town about 40 miles northwest of Raleigh, condemned the act in a statement.

"This highly disturbing act goes far beyond vandalizing property; it willfully threatens our community's safety via fire, and its hateful message undermines decency, respect and integrity in civic participation," Stevens, a Democrat, said in a news release.

Rev. William J. Barber, president of the North Carolina chapter of the NAACP, also condemned the act. Barber told the Associated Press on Sunday, "While vigorous debate on issues is acceptable, we in the NAACP denounce any kind of violence that is perpetrated toward our citizens or any political party."

Hillsborough is the county seat of Orange County, which also includes much of Chapel Hill and the University of North Carolina campus. Registered Democrats outnumber Republicans by a 3-1 margin in the county that picked President Barack Obama by a lopsided margin in the 2012 election.

The GOP office is located at a retail complex along the interstate that's several miles from the town's historic square.