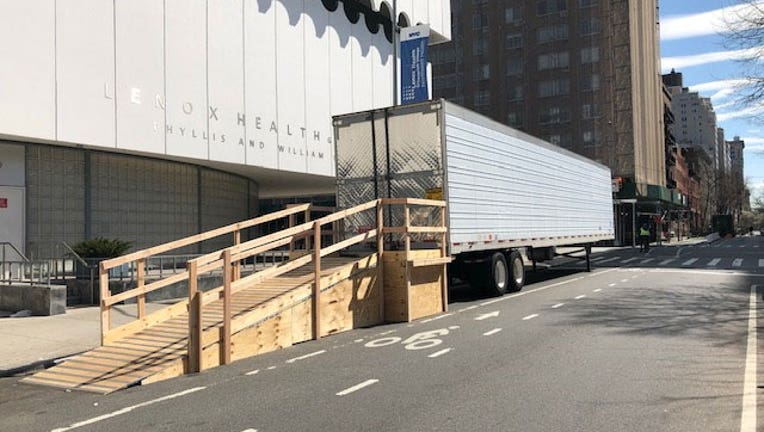 A refrigerated truck is seen outside of Lenox Hill Hospital on Manhattan's Upper East Side on Friday March 27, 2020. (Jose Salvador/FOX5NY)

NEW YORK - New York City is setting up temporary morgues and deploying refrigerated trucks outside of hospitals in case an expected surge of coronavirus deaths overwhelm the city morgues.

And the city is already starting to use them.

A video that was shared on social media over the weekend showed a forklift lifting what appeared to be a body into a truck outside of a Brooklyn Hospital.

A second video from outside of Mt. Sinai shows several trolleys on the sidewalk that appear to be holding bodies and the man who shot it says that bodies have been loaded onto a refrigerated truck.

The city has bought 45 refrigerated truck trailers to up the capacity to hold as many as 3,600 bodies, the Medical Examiner's office confirmed to FOX5NY.

A large tent has also been put up outside the central morgue by Bellevue Hospital in Manhattan.

There have been at least 776 COVID-19 deaths in New York City.

13 patients with Covid-19 died in a single 24-hour period this past week at Elmhurst Hospital in Queens.  One of the refrigerated trailers is now parked outside of Elmhurst.

Similar trailers were used in the wake of the World Trade Center attack in 2001 to help identify victims.