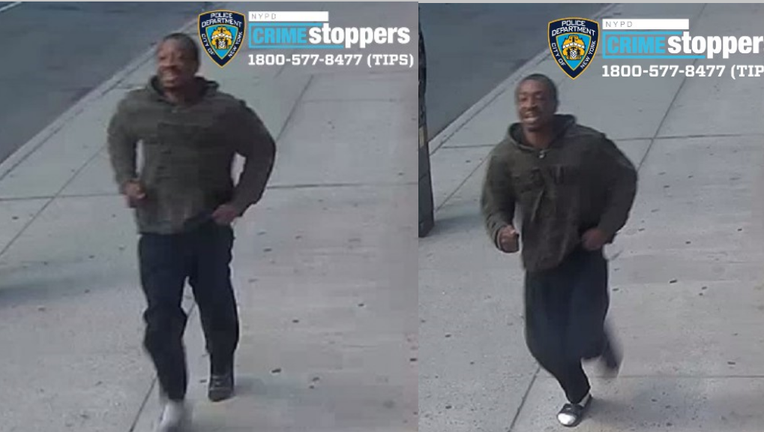 NEW YORK - The NYPD is hunting for a man who allegedly yelled anti-Asian slurs and spit at an Asian woman and her three children in Times Square this week.

According to authorities, the four victims were riding a 5 train en route to the 42nd Street - Times Square Subway Station at 2:30 p.m. on March 30 when the suspect approached them and began yelling anti-Asian slurs at the 44-year-old woman and her children, before spitting twice in her direction. The man then knocked the woman's cellphone out of her hand and kicked it out of the back door of the subway car, onto the tracks while the train was still moving.

He then exited the subway, running away on West 41st Street towards 8th Avenue.

The victim was taken by EMS to Mount Sinai West in stable condition for observation.

Lawmakers and community leaders are standing together to denounce hate amid a spike in crimes and attacks targeting Asian New Yorkers.

Police have released surveillance photos of the suspect who is described as between 50 and 55 years old, 6-feet tall, 150-160 pounds, and was seen wearing a dark camouflage sweater, dark sweatpants, and black sandals. The individual was also wearing a black sock on his left foot and a white sock on his right foot.

Anyone with information in regard to this incident is asked to call the NYPD's Crime Stoppers Hotline at 1-800-577-TIPS (8477) or for Spanish, 1-888-57-PISTA (74782). The public can also submit their tips by logging onto the Crime Stoppers website at WWW.NYPDCRIMESTOPPERS.COM, or on Twitter @NYPDTips.

We are learning new details about the horrific attack on a Filipino woman in Hell's Kitchen, and who may have tried to help her.

The attack is the latest in a spike in anti-Asian hate crimes across the nation. The NYPD has said it is adding undercover patrols across the city to combat the rise in hate crimes.