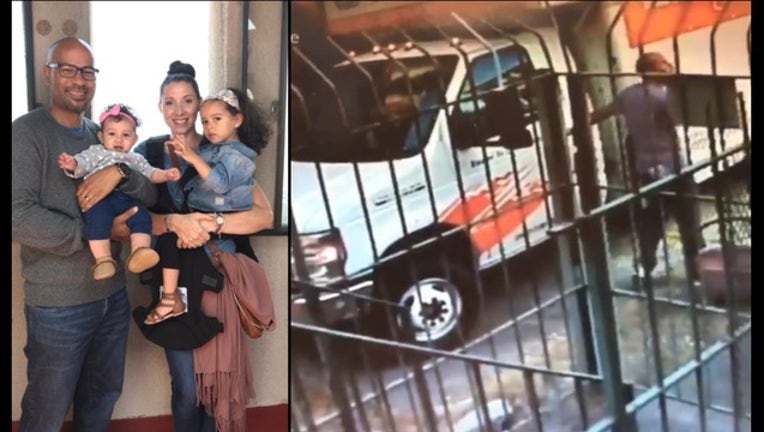 Adrian Minor says his family of four were preparing to move to Los Angeles when their U-Haul truck, full of their belongings, was stolen in front of their Piedmont apartment.

OAKLAND, Calif. (KTVU) - An Oakland family preparing to move to Los Angeles said they lost nearly everything they own when someone stole a U-Haul truck full of their belongings – including a family member’s ashes – from in front of their apartment in less than four minutes.

Adrian Minor, father of two young girls, told KTVU on Saturday that the truck was locked and the keys were in the house when the crime occurred on Friday about 12:30 p.m., just minutes after movers completed packing the trailer. Surveillance video shows him approaching the robbery in progress, unbeknownst to him, while he was holding one of his daughters in a car seat. He estimates he left the truck unattended for just four minutes. He said the suspect, seen on the video wearing a gray sweatshirt, apparently slipped inside somehow and hotwired it before taking off right before his very eyes.

Minor is seen on the video, taken from the Ambassador Apartments on Harrison Street, frantically reacting to the theft while he holds the door handle and appears to be yelling for help. “It was broad daylight with at least five people witnessing. I am certain the thief would have run me and my daughter over to get away,” he said.

The family was preparing to start a new life in Southern California. Minor was supposed to have been on the road to Los Angeles for a new position in banking on Friday.  Inside the truck was everything he owned, including his wife's wedding dress and his father-in-law's remains in an urn. He is now staying at am Emeryville hotel, in limbo, even though his new job starts later this week. He provided KTVU a police report number and and the surveillance video to review and release to the public.

A call to police was not immediately returned. Anyone with related information should contact the Oakland Police Department.

A family friend has created a Gofundme fundraiser to assist the family for those wishing to help.