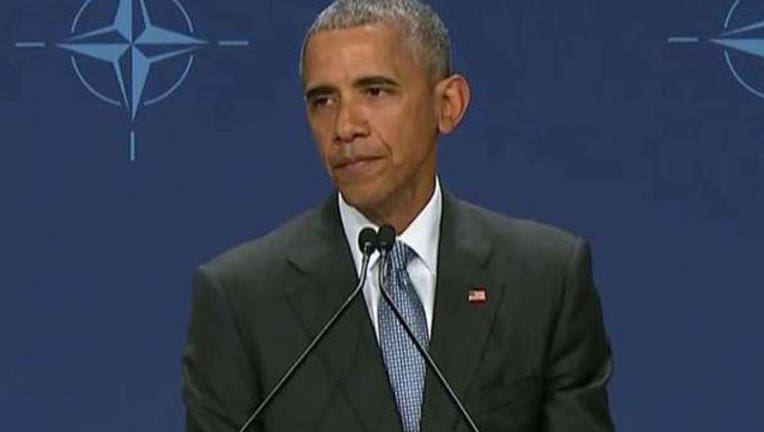 President Obama on Saturday urged Americans to remain optimistic about race relations in the immediate aftermath of two black males being fatally shot by police officers, then a gunman apparently retaliating by killing five Dallas law-enforcement officials, saying, “We cannot let the actions of a few define all of us.”

The president spoke two days after a black male killed the five officers, amid several days of protests across the country about a new wave of black males dying at the hands of police.

Still , Obama insisted that race relations in the United States have not reached a new low nor have regressed to the point of 1960’s rioting, as some have argued.

“That’s just not true,” said the president, speaking in Warsaw, Poland, at the end of his final NATO summit.

Obama also said that he has revived the task force formed after a white police officer fatally shot unarmed black teen Michael Brown two years ago in Ferguson, Mo., and that he’ll soon bring members to the White House. (The shooting resulted in weeks of violent and destructive protests.)

“As tough as last week was, we’ve got a foundation to build on,” said the president, who argued that violent crime in the U.S. has decreased over the “past five, 10, 15 years.”

In a wide-ranging press conference that included such topics as Brexit, ISIS and NATO, Obama also renewed his commitment to stopping gun violence.

“I am going to keep on talking about the fact that we cannot eliminate all racial tension overnight, but we can make it harder” for people to carry out their anger with weapons, he said.

“They don’t speak for all of us,” said the president, who mentioned neither by name. “That’s not who we are.”

Officials have said that Johnson, before being killed in a police standoff, said he wanted to  “wanted to kill white people, especially white officers.”

Obama declined to answer a reporter’s question about whether the Dallas sniper attack was a hate crime, saying, “It’s very hard to interpret the motives of this shooter, as we have seen in a host of mass shootings.”