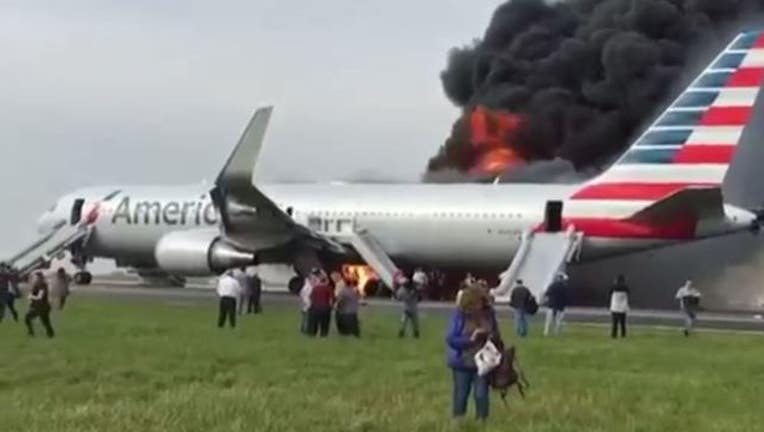 CHICAGO (AP) ��� Pilots were forced to abort a takeoff and evacuate passengers from a burning American Airlines flight Friday on a runway at Chicago O'Hare International Airport after the airliner experienced what a federal official said was a rare and serious type of engine failure.

American Airlines Flight 383 to Miami experienced an "uncontained engine failure," in which engine parts break off and are spewed outside the engine, the official said. The official wasn't authorized to speak publicly about the incident and spoke to The Associated Press on condition of anonymity. The danger of such a failure is that engine pieces effectively become shrapnel and can cause extensive damage to the aircraft.

Flames and heavy black smoke poured from the side of the Boeing 767 jet as it sat on the runway after the aborted takeoff. Officials said the incident left 21 people injured. Footage from the scene showed passengers coming down emergency slides and hurrying across grass next to the runway as emergency vehicles surrounded the plane. The right wing was drooping toward the ground and appeared to have partially melted.

Passenger Sarah Ahmed told WLS-TV the plane was speeding down the runway when she heard an explosion and saw flames and black smoke. She said everyone on the right side of the aircraft jumped from their seats and moved to the left side.

"People are yelling, 'Open the door! Open the door!' Everyone's screaming and jumping on top of each other to open the door," Ahmed said. "Within that time, I think it was seven seconds, there was now smoke in the plane and the fire is right up against the windows, and it's melting the windows."

The pilots reported an engine-related mechanical issue and aborted the takeoff, according to American Airlines spokeswoman Leslie Scott.

The Federal Aviation Administration said in a statement that the plane made an emergency stop around 2:35 p.m. after experiencing a problem during takeoff. An earlier FAA statement said the plane had blown a tire, but officials later deleted that information from the statement.

Buses were sent to pick up the passengers and bring them back to the terminal, Scott said. The passengers were to be placed on another flight to Miami Friday evening.

The National Transportation Safety Board will conduct an investigation into the incident, with investigators expected to arrive on the scene Friday evening, spokesman Keith Holloway said.

Uncontained engine failures are unusual thanks to improvements in designs and the metallurgy. There are many possible causes, including overheating, runway debris or large birds that get sucked into the engine or parts that break when they wear out but aren't replaced during maintenance checks.

Tom Walsh, an airline pilot who also works as a security consultant, said that engines that break apart can be especially serious if the parts end up cutting fuel lines or damaging other vital components of the aircraft.

But he said even such catastrophic failures don't necessarily doom a plane ��� even if a pilot runs out of runway and must take off.

"Planes are meant to fly with one engine," said Walsh, who has also flown Boeing 767s. "We are trained so that we can lose the engine at the worst possible time ... and then still successfully take off and land."

One of the best-known incidents of uncontained engine failure occurred in 1989, when 111 people were killed when a United Air Lines DC-10 crashed while making an emergency landing at Sioux City, Iowa. There were 185 survivors.

Such engine failures are taken "very seriously" in the aviation industry, said John Cox, a former airline pilot and aviation safety consultant. It's mandatory that airlines report the failures to the NTSB, he said.

"It's something everyone in aviation safety tracks very carefully," said Cox, president of Safety Operating Systems.

Engines are especially vulnerable to overheating that can cause parts to fail during takeoffs when they are already operating at very high temperatures, said John Goglia, a former National Transportation Safety Board member and expert on aircraft maintenance.

The giant blades inside the engines are revolving at about 13,000 rpm, he said. When one comes loose, it's like firing a bullet, he said.

The aircraft involved in Friday's incident was built in 2003 and is among American's youngest planes of that model. According to data from FlightGlobal, an aviation news and industry data company, at the start of this year the plane had flown more than 47,000 hours and made more than 7,500 cycles ��� each takeoff and landing is one cycle. American is flying 767 aircraft that have more than 100,000 hours and 18,000 cycles.