Would you ever move to Ohio? Some billboards have gone up in the last few months trying to convince people that Ohio is a better place to live and work that Austin.

AUSTIN, Texas - A company in Ohio has come up with a creative way to entice Austinites to move to the Buckeye State. You may have seen the big red billboards around town: "Ohio" on the right, and a little dig at Austin on the left.

"Just an interesting tactic for other states to try to get people to move into their states," said Sean Callahan, who lives in Austin.

Economic development Company JobsOhio is behind the billboards, casting the Buckeye State as business-friendly and affordable.

JobsOhio said in a statement: "Ultimately, the campaign is meant to be fun and just a bit edgy, with the goal of getting ahead of competitor states and attracting jobs and investment for the people Ohio." 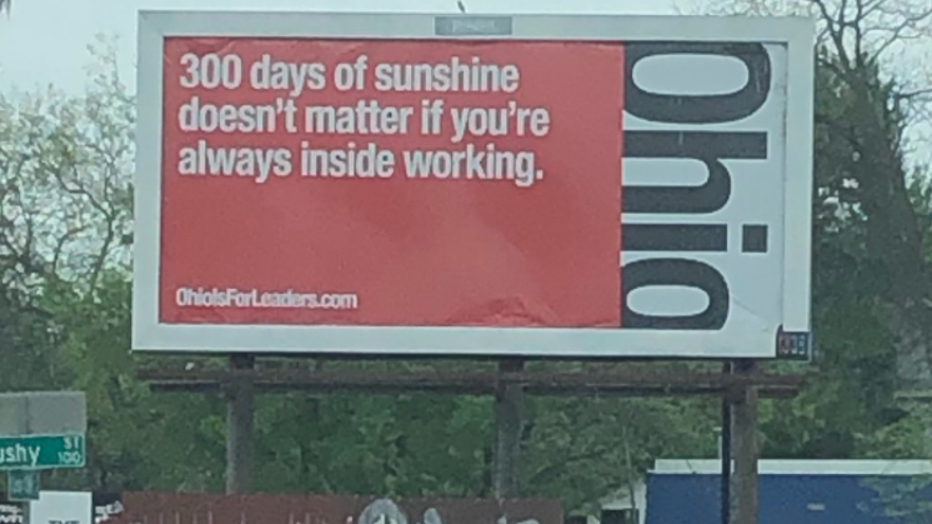 Our sister station in Cincinnati, FOX 19, found some people who think Austinites just might like it there.

"The job opportunity here is really good, especially if you're trying to start a new business," said Dante Johnson.

But would Austinites move there?

"I can’t imagine anyone moving from Austin, Texas, to Ohio for any reason," said Michele Randall.

"Nobody wants to [expletive] move to Ohio," said Ash Delaney.

But that whole four seasons thing is kind of nice, right?

"We have spring, summer, hot and hotter. That’s four seasons. I’m okay with that," said Randall.

"I’m originally from Michigan," said Callahan. He said he moved to Austin to "get away from the cold."

Ohio weather aside, many say Austin just has too much to offer.

"It’s 100% percent the people. Everybody’s super welcoming, super accepting, and there’s so much to do," said Delaney.

"We have culture. We have wonderful people. We have a vibrant economy. We have it all," said Randall.