During his visit to Ohio on Wednesday, President Joe Biden announced the final steps in the American Rescue Plan’s Special Financial Assistance Program which aims to save pensions from insolvency through 2051.

Democrats across Ohio are pleading for help in the state's Senate contest, afraid they may lose a winnable election unless national party leaders make major investments in the coming days.

So far, the most powerful groups in Democratic politics have prioritized Senate pickup opportunities in North Carolina, Wisconsin and Pennsylvania over Ohio, once a perennial swing state that veered right in the Trump era. But on the eve of the 2022 midterms, some public polls suggest Ohio is as competitive as the other swing states, leaving many Democrats here wondering why their party isn't backing Senate contender Tim Ryan more forcefully.

"Ohio’s just not a priority anymore. It’s a daunting task that we have to navigate," said state Rep. Dontavius Jarrells, a Ryan ally. "The reality is that without federal investments, he may not win."

Ryan, a 10-term congressman, said in an interview that party leaders who believe he can't win "have no idea what’s going on out here."

"I’ve come to terms with the fact that we’re probably not going to get any help. I’m playing with the team we got on the field," Ryan said. "I can’t think of anything more Ohio than us taking on the entire political establishment at this point."

The tension is a reflection of the difficult decisions Democratic leaders are facing about how to invest limited financial resources in the final weeks before the Nov. 8 election. With a razor-thin Senate majority, any move could carry longterm consequences. If Republicans gain even one seat, they would take control of the Senate — and with it, gain power to control judicial nominations and President Joe Biden's legislative agenda.

And if Ryan comes up short by just a few points, there will likely be an intense round of post-election questions about whether the party could have done more to win.

The financial disparities in the race are stark. Republican JD Vance, a venture capitalist and author of "Hillbilly Elegy," is the beneficiary of more than $30 million from outside Republican groups. They include organizations aligned with former President Donald Trump and Senate Republican Leader Mitch McConnell. By contrast, Ryan has benefited from less than $4 million in outside spending so far.

U.S. Sen. Sherrod Brown, who has built a reputation as a progressive Democrat who can still win over working class voters in places like Ohio, said the party should do more.

"If we want to win in Ohio, we need to invest in Ohio," he said. "Tim Ryan is running a great campaign because he’s showing voters that he is the candidate who’s on their side. That’s how you win elections."

David Bergstein, the spokesman for the Democratic Senatorial Campaign Committee, which is the official campaign arm for Senate Democrats, said the organization was "proud" to support Ryan’s campaign with a coordinated investment of roughly $1 million in television spending that allowed the campaign to take advantage of lower advertising rates for candidates.

There is still a chance Democrats will find some additional money to help Ryan. 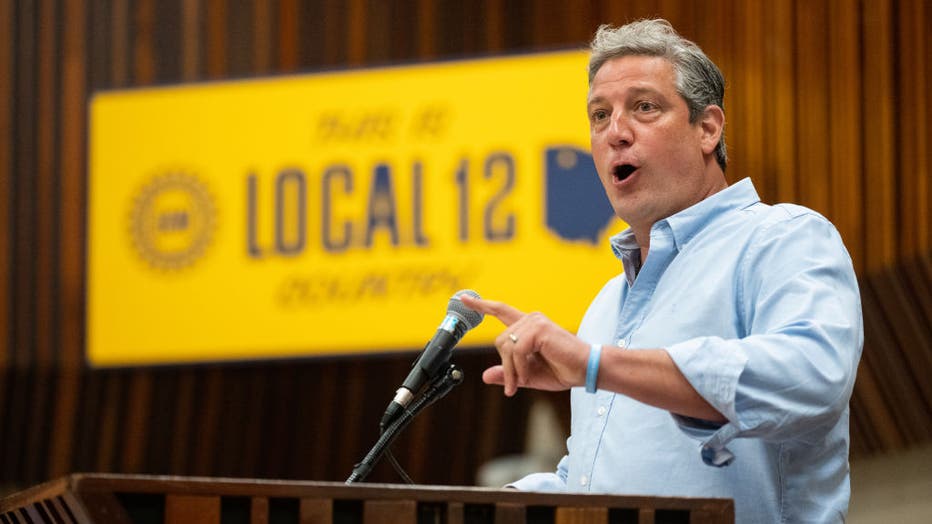 The Senate Majority PAC, by far the most influential super PAC in Senate Democratic politics, is not ruling out significant Ohio investments over the election’s final days, although the group has spent little there so far compared with other key states. On Thursday, the group announced an additional $4 million investment in North Carolina television advertising, bringing its total spending in the state to $15 million and counting.

"Tim Ryan is running a remarkably strong campaign that is resonating with Ohio voters of every political persuasion and putting Republicans on defense, while Vance’s weak candidacy has become a serious liability for the GOP," said JB Poersch, Senate Majority PAC president. "We’re going to continue making strategic, effective decisions that put us in the best position possible to accomplish our mission: defending our Democratic Senate majority."

Another pro-Democrat group, the Save America Fund, has already spent $2.5 million on television ads designed to help Ryan since August. The group has been discussing more significant buys with other PACs.

"We are having lots of conversations about how Tim Ryan can win this race," said Eric Hyers, a former colleague of Ryan’s campaign manager who is running the Save America Fund. "We are all in on this."

But there are no easy options for Democratic groups deciding where to dedicate their final round of resources.

Democrats are defending vulnerable incumbent senators across Arizona, Georgia, Nevada and New Hampshire. They have also been investing heavily in flipping Republican-held seats across Pennsylvania, North Carolina and Wisconsin.

Democratic officials privately note that Trump has twice won Ohio by 8 points, reflecting the Republican leanings of the state. By comparison, Trump won North Carolina by less than 1 percentage point and lost Wisconsin by just over 1 percentage point.

National Democratic strategists also note that Ohio's large working-class population has shifted sharply away from Democrats in recent years, despite Ryan's best efforts to appeal to such voters.

That sentiment has led to a sense among Democrats in Ohio that their national party is abandoning them.

"There's a lot of frustration," said Ohio-based Democratic strategist Cliff Schecter, conceding that national Democratic leaders have a difficult job. "Tim Ryan doesn’t need a lot -- just something. Do what you gotta do. Find a little bit of extra money. This race is incredibly winnable."

Some Republicans privately see Vance as an underwhelming candidate, although most expect him to win because of the state’s recent Republican shift. He has badly trailed Ryan in fundraising, typically an important gauge of a candidate’s strength. Ryan has raised more than $21.5 million on his own, compared with Vance’s $3.6 million.

As the race moves into its final weeks, Vance is leaning on Trump’s continued popularity in the state to maintain momentum, particularly among undecided working-class white voters. Donald Trump Jr., one of Vance’s strongest supporters, campaigned alongside the Ohio Republican last week.

But Vance's relationship with Trump is complicated.

Vance was initially a so-called "Never Trumper" before Trump won the president. The former president then botched Vance’s name at a rally during the spring primary. And at Trump's most recent Ohio rally for Vance, the former president quipped that Vance "is kissing my a—" for political support.

Ryan echoed that comment during a debate this week, calling Vance an "a— kisser." In the interview, Ryan said he's considering renaming his campaign bus "The A— Kicker Express."

He also made clear that while he'd welcome national Democratic dollars, he doesn't want Biden to campaign on his behalf.

"It’s nothing personal. It's just like, I’m running in Ohio. I know Ohio. I know the message," Ryan said. "There’s nobody that can express that better than me. And every time you bring people in, you take on their enemies, they may not say the things way you want it to be said, and we've run a very disciplined campaign for the last year and a half. I just want to make sure that I’m the face, I’m the voice."

Ryan added, "And I want Ohioans to know I stand on my own."

Yet many Ryan allies continue to clamor for help from the national party.

Former Ohio Democratic Party Chairman David Pepper said the DSCC needs to step up and support Ryan now, who’s "fighting as effectively as anybody could" without national money.

"It’s so similar to what happened in ’16, it’s kind of hard to watch," Pepper said, referencing former Democratic Gov. Ted Strickland’s loss to Republican Sen. Rob Portman in that year’s Senate race. "It’s when polls are tied, our candidate has more money and is a stronger candidate and, when Republicans throw a punch, we walk away. It’s a terrible signal to send."

In 2016, Strickland ultimately lost to Portman by 21 points. Next door in Pennsylvania, Republican Sen. Pat Toomey won by less than 2.