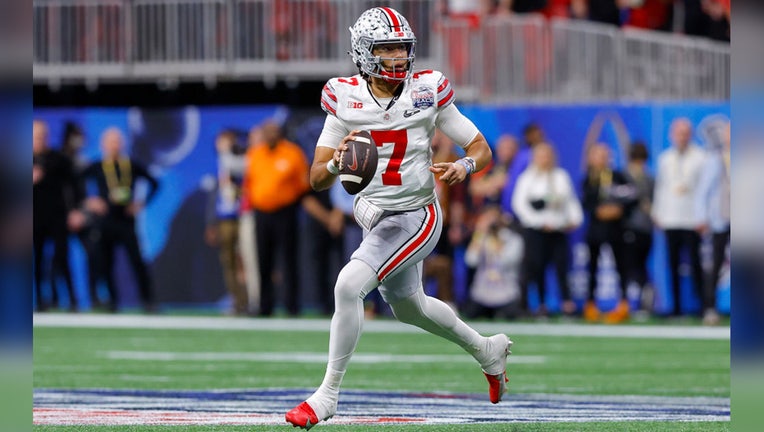 FILE - C.J. Stroud #7 of the Ohio State Buckeyes rolls out in the first half against the Georgia Bulldogs in the Chick-fil-A Peach Bowl at Mercedes-Benz Stadium on Dec. 31, 2022, in Atlanta, Georgia. (Todd Kirkland/Getty Images)

COLUMBUS, Ohio - Ohio State quarterback C.J. Stroud will give up a final year of eligibility to enter the NFL draft, where he is expected to be a top-five pick.

The two-year starter for the Buckeyes announced his decision, which had been expected, on social media on Monday, the last day eligible players can declare for the draft.

"This process has been difficult, and the decision, one of the hardest I've ever had to make," Stroud said in the statement. "As a kid, I dreamed of playing football at the highest level, and after much prayer, I've made the decision that it's time to turn those dreams into a reality."

Stroud led the Buckeyes to back-to-back 11-2 seasons but lost to Michigan twice. Ohio State made it to the College Football Playoff last season but lost to eventual national champion Georgia 42-41 in a semifinal, a game in which Stroud threw four TD passes.

The 21-year-old was a Heisman Trophy finalist in both seasons. He amassed more than 8,000 passing yards and threw 85 touchdowns. He is the holder of 16 school offensive records.

Kyle McCord and Devin Brown are expected to compete for the starting quarterback job in 2023.